Clarksville, TN – Austin Peay State University (APSU) baseball shortstop Garrett Kueber [1] drove in a run to give the Governors its first lead but it could not fend off a late Jacksonville State rally in a 14-5 Ohio Valley Conference loss, Friday night, on Joe Maynard Field at Raymond C. Hand Park. 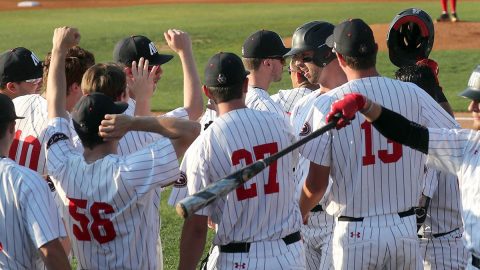 Austin Peay (30-22, 19-10 OVC) lost the three-game series to the Gamecocks and will be the No. 2 seed in next week’s OVC Baseball Championship. Jacksonville State (33-21, 21-8 OVC) clinched the regular-season title and earned the No. 1 seed in the tournament.

Both teams traded runs in the first inning. JSU scored when catcher Alex Webb doubled to drive in a leadoff walk. APSU leveled the score on right fielder Parker Phillips [3] hammered his 23rd home run of the season over the scoreboard in left center.

Austin Peay would have a golden opportunity to break the game open in the second inning, loading the bases when three consecutive batters reached base with one out. However, Gamecocks starter Isaiah Magwood struck out the next two batters to fend off the threat.

The Governors would grab their first lead of the series in the fifth inning when second baseman Malcolm Tipler [4] beat out an infield single and advanced to second base on a wild throw. Two batters later, Kueber would ground out but Tipler scored, giving the Govs a 2-1 lead.

Jacksonville State would turn the tables in the sixth on a pair of home runs. Third baseman Nic Gaddis hit a solo home run to tie the game. Two batters later, first baseman Alex Strachan hit a two-run home run for a 4-2 advantage.

Austin Peay would load the bases in its half of the sixth inning. The Govs would only get a run out of the threat, pinch hitter Bobby Head’s [5] bases-loaded walk, before the Gamecocks escaped. Jacksonville State would break the game open in the seventh, Gaddis delivering the decisive blow with a grand slam.

Phillips would end the day 2-for-5 with a RBI and two runs scored. Catcher David Martinez [6] was 2-for-4 with two RBI on a seventh-inning double.

Magwood (2-1) picked up the win after allowing three runs on four hits and three walks over five-plus innings. Gaddis finished the day 3-for-5 with two home runs and five RBI.