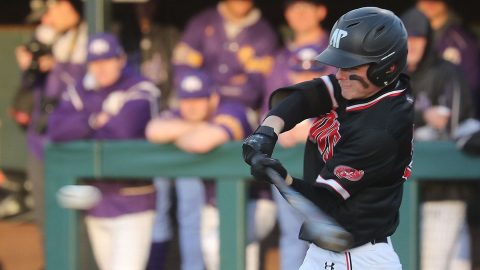 Jacksonville State (34-21, 22-8 OVC) used a trio of home runs in the first four innings to build an early lead.

Catcher Alex Webb opened the scoring with a solo home run in the first inning before designated hitter Alex Strachan added a two-run shot in the second. Webb then delivered the big blow in the fourth with a grand slam that gave the Gamecocks a 9-0 lead.

Austin Peay would battle back in its half of the fourth inning, scoring four times. Right fielder Parker Phillips [1] hit a leadoff home run to start the rally. Center fielder Garrett Spain [2] then hit a ball off the top of the wall in center field and raced around the bases for the Governors first inside-the-park home run since 2014.

First baseman John McDonald [3] added another solo home run before the Govs tacked on two more runs in the frame, closing to 9-5.

However, the Gamecocks quickly responded with three more runs in the fifth, two on first baseman Andrew Naismith’s two-run double to put the game out of reach.

Govs starter Ryan Kouba [6] (4-1) suffered his first loss of 2019 after allowing nine runs on eight hits while striking out seven batters in 3.2 innings.

Needing a spark while facing a nine-run deficit, Austin Peay State University certainly got a jump start with two utterly different home runs to start the bottom of the fourth. Right fielder Parker Phillips’ [1] hit a monstrous home run to left center that conservatively went 450 feet while reaching the hill beyond the wall.

Moments after he touched home plate center fielder Garrett Spain [2] showed off his speed as his line drive hit off the top of the wall in center field and eluded the JSU defense long enough for him to circle the bases for an inside-the-park home run.

Inside The Park History
Spain’s inside-the-park home run was the first by a Governors hitter since the 2014 season. Logan Gray [8] turned the trick against Eastern Illinois that season in the Govs OVC-opening series in March.

500 Strikeouts
With starting pitcher Ryan Kouba’s [6] second strikeout of the game, Austin Peay broke through the 500-strikeout mark in a season for the first time in program history. The Govs racked up 15 strikeouts against the Gamecocks Saturday, finishing the day with 512 strikeouts with at least two games remaining on the 2019 schedule.

ASPU Baseball  (30-23, 19-11 OVC) turns its attention to the 2019 Ohio Valley Conference Baseball Championship. The second-seeded Governors will face the winner of Tuesday’s play-in game between Eastern Illinois and UT Martin in a 4:00pm, Wednesday, May 24th contest at Rent One Ballpark in Marion, Illinois.