The Govs (30-23, 19-11 OVC) entered last week’s final OVC series versus JSU looking to win the regular-season title and the first-round bye that goes with it, but suffered its first OVC sweep instead at the hand of the Gamecocks, settling for the second-seed in the up-coming tournament. 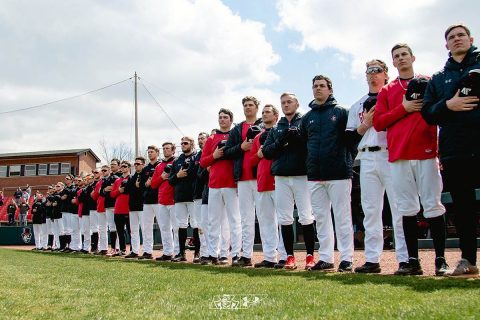 The Govs face the winner of Tuesday’s elimination game between seventh-seed Eastern Illinois and eighth-seeded UT Martin, 4:00pm, Wednesday, May 22nd to open their tournament run.

The sweep was not only the first suffered by the Govs in OVC play this season, but was also the first three-game losing streak suffered by thee Govs since mid-March, when the dropped the final two games of their OVC series at Murray State (March 10th-11th), followed by a mid-week loss at Southern Illinois (March 12th).

The three losses to close this season also matches the Govs final season OVC series from 2018, when they dropped all three home games to Eastern Illinois, on its way to a five-game losing streak heading into the OVC Championship – where they lost two straight and were eliminated.

But though the feel and finishes to the last two seasons maybe similar no one should give up hope for a deep run by the Govs in the tournament.

First, both times the Govs lost at least three straight games this season they responded with a win streaks of three-or-more games.

Second, the Govs were 5-2 versus who ever its first-round opponent will be, going 2-1 at UT Martin (April 20th-21st), including scoring 22 runs in its final game versus the Skyhawks, while going 3-0 at Eastern Illinois (May 10th-12th), averaging 16 runs per game versus the Panthers.

Despite going 3-3 versus those two opponents during the regular season, the Govs should be the favorite to win a matchup versus either opponent.

That would set up a probable rematch with the Gamecocks in the finals of the winner’s bracket.

Yes, the Govs dropped all three games to JSU last week but looking at some of the numbers in that series they must feel like a second chance in the tournament may go their way, because there is too much talent on the roster for that if they play to their potential.

The Govs enter the tournament as the third highest-scoring team in the OVC, so the likelihood of a repeat of their .185 team batting average with runners in scoring position last week – including going 0-6 with the bases-loaded – should be better this time around.

Austin Peay pitchers should also rebound from a down week in letting JSU get their lead-off runner on base 13-of 28 times (46.4 percent) last week, Govs starters not making it past the fourth inning twice out of the three games and the bullpen having an ERA of 8.34 in 15.1 innings of work.

Bottom line, the Govs have the talent to win the tournament — or at least make a deep run.

They just must regroup, put last week and last year’s close behind them and play like the team that had a chance at the regular-season title heading into the final week of the season. If they do that, when there’s a good chance you may see them come Saturday in the championship game.