Clarksville, TN – On Wednesday, May 22nd, the Austin Peay State University (APSU) baseball team returns to the OVC Championship for a fourth-consecutive season, beginning its run in the 2019 edition with a 4:00pm contest at Rent One Ballpark in Marion, Illinois. 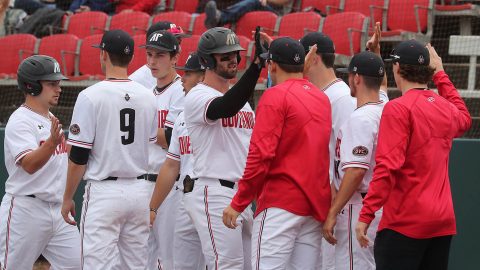 Austin Peay Baseball to face either Eastern Illinois or UT Martin Wednesday after at the OVC Tournament. (APSU Sports Information)

The Governors will face the winner of the Eastern Illinois-UT Martin play-in contest, which will be held Tuesday night.

The Govs finished the regular season tied for second place with Morehead State, but earned the tournament’s No. 2 seed courtesy of its regular-season series victory against the Eagles. It is the Govs best regular-season finish since 2013.

Austin Peay made its move to second place by closing the regular season winning 15 of its final 23 games.

The Govs stood at 15-15 overall and 9-6 in OVC play days into the season’s second half after losing an OVC set at Eastern Kentucky, April 5th-6th. They won their next four conference series and won a nonconference tilt against Jacksonville as part of the streak.

Senior outfielder Aaron Campbell has qualified for the NCAA national rankings, joining with a .380 batting average that is 40th in Division I and second in the OVC. He also owns a league-leading .475 on-base percentage that is 53rd nationally.

Center fielder Garrett Spain reached base in the first 43 games of his collegiate career – the third longest streak in APSU history. He ranks 15th among NCAA freshmen with 49 RBI.

Junior right fielder Parker Phillips hit his 20th home run of 2019 at Tennessee, May 7th, breaking the APSU single-season record he set last season. Currently, his 24 home runs are ranked second nationally and he ranks 27th among Division I hitters with an OVC-best 62 RBI.

Phillips is the sixth hitter in OVC history to hit 50 or more home runs. He currently has 54 career homers, third-most in OVC history.

Freshman designated hitter Matt Joslin has been the right man in the right spot in 2019. He is batting .643 with 20 RBI in 15 bases-loaded opportunities this season, including a walk-off grand slam against Southern Illinois, April 16th.

Freshman third baseman Gino Avros brings a six-game hit streak into the tournament and has a hit in 18 of his last 23 games, batting .337 (32-95) with 25 runs scored. He has boosted his average 93 points thanks to the burst.

Redshirt senior shortstop Garrett Kueber has nine multi-hit outings in his last 16 games, including a five-hit outing against WKU, Tuesday. In those 16 games, he is batting .438 (28-64) with three home runs, 14 RBI and 21 runs scored.

Junior utility man Malcolm Tipler is batting .429 (9-21) with seven RBI over the last seven games with three doubles and a home run.

Senior catcher Alex Sala has hit a home run in each of his last two official at-bats. He is batting .368 (7-19) with three extra base hits in his last six starts.

The Govs hold a formidable 1-2 punch on weekends with left-handers Josh Rye and Jacques Pucheu combining to go 11-6 in their 20 OVC starts with a 3.22 ERA.

Pucheu was ranked first among OVC starters in OVC-only ERA (2.78) and league victories (6) with Rye ranked eighth among starters in ERA (3.83) and second in wins (5).

Since April’s start, Rye has a 2.36 ERA in six starts with 4-0 record. He has not allowed a run in three of those six outings and recorded 38 strikeouts in 36.2 innings.

Pucheu has swung back and forth over his last nine outings, following an outing with one or fewer earned runs with a multi-earned run outing. He allowed four runs over six innings in his last outing against Jacksonville State, May 17th.

Right-hander Ryan Kouba has made the last three Game 3 starts. He is 2-1 and held opponents to a .259 batting average in his starts.

Austin Peay set its single-season strikeout mark against Western Kentucky, May 14th, and moved past the 500 K mark against Jacksonville State, May 19th. The Govs 512 strikeouts ranks 22nd among all Division I teams and their 9.82 K/9 rate is 18th in the country.

Austin Peay is 43-31 all time in OVC Tournament appearances and is a six-time champion.

The Govs last OVC Tournament crown came in 2013 to complete a Three-Peayt of tourney titles.

Austin Peay is 4-6 at the OVC Tournament under head coach Travis Janssen, who has taken the Govs to the tournament in each of his four seasons at the helm.

APSU is 11-10 against the teams in the tournament. The Govs won series against Belmont, Eastern Illinois, Morehead State and UT Martin. Austin Peay lost series to Eastern Kentucky, Jacksonville State and Murray State.