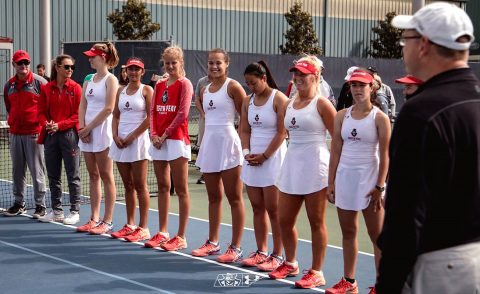 It marks the second year in a row Austin Peay has been the Ohio Valley representative for this honor, which recognizes the Govs relentless effort no only on the court and in the classroom, but in the Austin Peay community as well.

The on-court part was stellar—the Govs went 22-1 in 2019, winning 22 straight matches and securing both the Ohio Valley Conference regular-season and tournament titles. Ross Brown [1] earned OVC Coach of the Year honors and five Govs were named All-OVC to cap the best season in the program’s history.

Off the court, the women’s tennis team made it a point to get out in the community, helping at First Christian Church’s food drive, reading at Burt Elementary and with Read Across America, serving at Buddy Ball and many other community initiatives.

The APSU Govs also conducted free tennis clinics and helped at the on-campus Breast Cancer Awareness 5K hosted each year by the Austin Peay Foy Fitness and Recreation Center. For their commitment to the community and high standards on the court, the Govs add this ITA honor to their AP Govs Cup win at the third-annual ESPEAY Awards in April.