Nashville, TN – The Nashville Sounds cranked out 16 hits in 9-5 win against the Express in front of a sellout crowd of 11,506 at First Tennessee Park Sunday night. Zack Granite had three hits for Nashville while Matt Davidson, Jett Bandy and Hunter Cole each hit two-run homers.

In the bottom of the first, Granite led off with a bunt-single and scored on a Scott Heineman double. Davidson hit Heineman in on a home run to give Nashville a 3-0 lead.

Kyle Tucker led off the top of the fourth inning with a solo home run for Round Rock to cut Nashville’s lead 3-1. 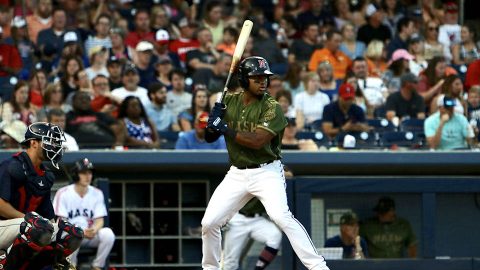 The Sounds responded with two runs in the bottom-half when Heineman hit a sacrifice fly that scored Bandy and Eli White doubled to score Granite.

The score was 5-1 entering the fifth.

Bandy added two more runs for the Sounds in the bottom of the fifth when he hit a two-run homer to extend Nashville’s lead 7-1.

Round Rock scored four runs in the top of the sixth with a sacrifice fly by Yordan Alvarez and an RBI single by Drew Ferguson. Taylor Jones hit a two RBI single that put the Express down two runs at 7-5.

Cole put the cherry on top with a two-run homer in the bottom of the seventh to put the Sounds up 9-5. That would be enough to hold off Round Rock.

Nashville’s 16 hits were a season-high for the team.

Davidson’s two-run homer in the first inning was his 16th on the season. He ranks tied-for-third among home run leaders in the Pacific Coast League.

With a win tonight, Phillips Valdez ended his losing streak of six games.

2017 American League MVP and six-time All-Star Jose Altuve played in his first game of MLB Rehab for Round Rock, going 1-for-5 with a run and two strikeouts.

The Nashville Sounds and Round Rock Express will play a doubleheader during the day on Memorial Day, May 27th. Game one will continue a suspended contest from April 18th, which will start at 12:05pm in the bottom of the second inning with the score at 0-0. It will be a full nine-inning contest. Game two will be a seven-inning game and will start approximately 30 minutes after the conclusion of game one.