In response, Clarksville Mayor Joe Pitts has asked the City Council to approve funding in the Fiscal Year 2020 budget for money to keep the project moving forward. 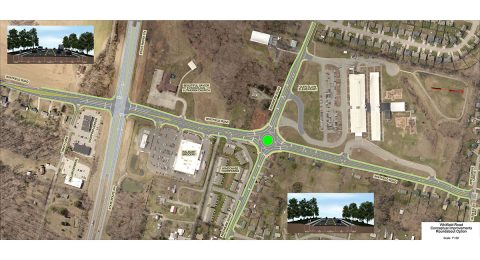 A drawing of the proposed roundabout option for the Whitfield/Needmore Road intersection.

The proposals call for Whitfield Road to be widened and improved near the 101st Airborne Division Parkway, Needmore Road and Glen Ellen Elementary School.

The preliminary plans also call for the improved Whitfield-Needmore intersection to feature a roundabout design.

The total Whitfield Road project is expected to cost $15.85 million, of which $500,000 was budgeted last year for preliminary design. In his FY20 budget, Mayor Pitts is requesting a total of $2.85 million for the project — $500,000 for engineering and design and $2.25 million for right of way acquisition. 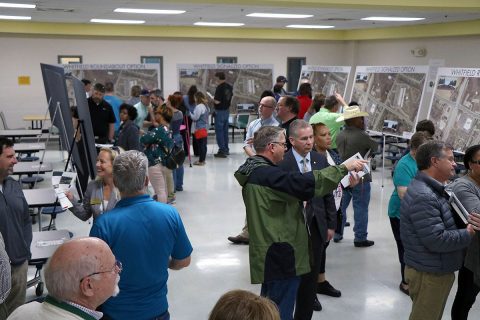 The City Council is completing deliberations on the FY20 budget in coming weeks, and is expected to vote on a final budget June 20th. Another $13 million will be requested next year, in the FY21 budget, to fund construction to complete the Whitfield Road project.

“The area around this stretch of roadway continues to grow, with a school, a supermarket and churches, as well as a good number of new homes, so this is a much-needed improvement,” Mayor Pitts said. “We want to hurry up and get this project designed and built.”

As a result, pending Council approval of the project budget, the engineering consultants and Clarksville Street Department agreed last week on a project schedule that calls for the engineering and design, utility relocation planning, and right of way acquisition to move ahead this year in preparation for a construction start in October 2020.

Materials prepared by HDR, the project consultants, and the Clarksville Street Department — first shown at a public meeting April 3rd — can be viewed online. Public comments were received at the meeting and for 30 days afterward using an online survey.

The Street Department and HDR presented a summary of those comments to Mayor Joe Pitts on May 24th.

Here are some of those results:

Notably, the analysis of the survey said the low score of “Familiarity,” which received just 5 votes, “indicates that when presented with the increased efficiency and safety inherent in a roundabout, citizens are generally willing to embrace this relatively unknown option.”

However, not all respondents were in favor of the roundabout. Six comments expressed concern over “confusion,” while seven respondents said they preferred a traditional traffic signal option.

When asked what other features they would like included in the project, 43 respondents favored a 10-foot “Multi-Use Path,” 41 favored “Lighting,” and 30 said they favored a “Roundabout.”