Nashville, TN – On Tuesday, the Nashville Sounds lost a doubleheader to the Salt Lake Bees at First Tennessee Park. Game one was lost 2-1 in a pitcher’s duel while game two was lost on a late surge by the Bees’ offense, who won 9-4.

The first runs of game one did not come until the fifth inning. Salt Lake’s Michael Hermosillo led off with a solo blast off the batter’s eye. Jarrett Parker hit a solo homer himself to give the Bees a 2-0 lead.

Nashville scored one run in the sixth inning. Matt Davidson led off with a double off the wall. Patrick Wisdom laced a single into left field that scored Davidson and cut the Salt Lake lead 2-1. 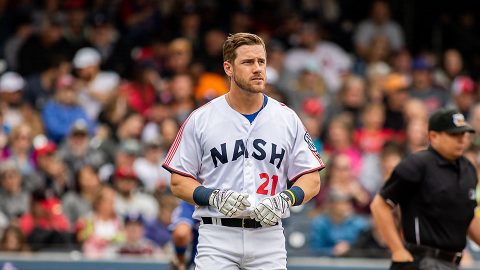 The Sounds threatened to tie the game in the bottom of the seventh inning. Zack Granite hit a single and reached second on a stolen base with two outs. Nashville could not capitalize on the opportunity as they fell to Salt Lake 2-1 in game one.

Both offenses worked earlier in game two. In the second inning, the Bees scored four runs. Jarrett Parker singled and scored on a Brennon Lund double. With two outs, Lund scored on an error after Roberto Pena hit the ball in play. Matt Thaiss singled to get on and Jose Rojas hit a two-run double to put Salt Lake up 4-0.

That lead was cut in half in the bottom of the second. Davidson and Tyler Pill singled to get the Sounds started. Carlos Tocci doubled to score Davidson and Jett Bandy singled to score Pill. Nashville would end the inning with bases loaded but put themselves down at 4-2.

Another run was scored by the Bees on back-to-back doubles by Jared Walsh and Jarrett Parker to make the score 5-2. But Patrick Wisdom responded for the Sounds with a two-run homer to cut the lead to 5-4.

Walsh and Parker hit back-to-back homers plus two more runs for the Bees in the top of the seventh and finalized the doubleheader sweep as the Sounds lost game two 9-4.

Patrick Wisdom hit his seventh home run of the season in game two. His last home run came on June 8 at Tacoma, a solo homer off Matt Carasiti.

Nine different pitchers were used for the Sounds between both games. Only three of those pitchers allowed earned runs (Reed Garrett, Tim Dillard and Jake Petricka).

The Sounds get a day off on Wednesday before leaving on a nine-game road trip. Thursday starts a five-game series at the New Orleans Baby Cakes, as Nashville right-hander Seth Maness (4-1, 3.53) will face right-hander Zac Gallen (9-1, 1.77) of the Baby Cakes.