Three Governors have taken summer residence in The Land of the Midnight Sun, competing in the Alaska Baseball League. 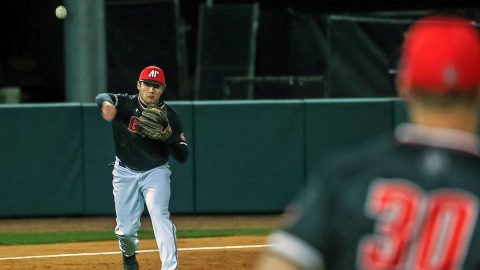 Infielder Malcolm Tipler [1] and outfielder Garrett Spain [2] made the trip to play with the Anchorage Glacier Pilots.

For pitcher Nolan Monaghan [3], an Alaska native, it is a return home to play with the Matsu Miners.

Two Govs – infielder Gino Avros [4] and pitcher Sebastian Martinez [5] will spend the summer in Maryland in the Cal Ripken Collegiate League. After ending the 2019 season with his first home run as a Governor, Avros has continued to discover his power with a pair of home runs in 11 games with the Gaithersburg Giants. Martinez has made three relief appearances in the first two weeks with the Bethesda Big Train, beginning his summer with two scoreless innings, June 5th.

A little further south, Governors pitchers Ryan Kouba [6] and Tyler Thompson [7] are teammates on the Macon Bacon of the Coastal Plain League. Kouba has five appearances on the mound and has posted a 1-1 record and 3.86 ERA in 11.2 innings of work. Thompson has two appearances and a 1.80 ERA in five innings.

In the middle of the country, infielder Skyler Luna has taken up residence on the wide plains of Kansas and the Kansas Collegiate League. Playing for the Hays Larks, he has seen action in seven games, opening the summer with a four-game hit streak.

Closer to Clarksville, designated hitter Matt Joslin [8] is playing in the Ohio Valley League with the Dubois County Bombers in Huntingburg, Indiana. He owns a .333 batting average and .543 on-base percentage (nine walks) in his first eight games of action.