The Redbirds scored first with two runs in the top of the first inning. The first run was scored on a balk by Joe Palumbo. Andrew Knizner hit an RBI single to get the second run in.

In his first game back on a rehab assignment, Scott Heineman hit a two-run homer to tie the game in the top of the second inning. 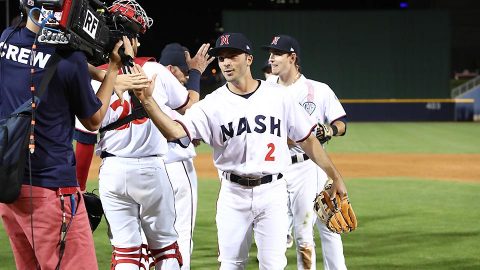 Adam Moore hit an RBI single later in the inning to give the Sounds a 3-2 lead. Irving Lopez hit a solo home run in the bottom of the second to tie the game 3-3.

Memphis scored one more time in the bottom of the third inning. Edmundo Sosa hit a solo home run to make it an 8-4 game. That would be all the Redbirds would score.

The Sounds stuck the dagger in the ninth inning scoring two more runs. Moore hit another RBI on a fielder’s choice and Carlos Tocci hit an RBI single to make the final score 10-4. Taylor Guerrieri (2-1) earned his second win for the Sounds in relief.

Joe Palumbo, who is on Texas’ 40-man roster, also made his Triple-A debut. He went 4.1 innings and allowed four earned runs on five hits and a walk with four strike outs. He earned no decision.

The Sounds had 19 hits tonight, setting their new season-high. They had 18 hits on June 22nd at New Orleans.

Zack Granite matched a career-high four hits. He’s achieved the feat four other times in his career, his last coming this season on May 8th at Oklahoma City.

Taylor Guerrieri, Kyle Bird and Josh Fields combined for 4.2 shutout innings out of the bullpen.