Clarksville, TN – Robbie Wilson [1], head coach of the Austin Peay State University (APSU) Men’s Golf team, unveiled a challenging slate for the Governors 2019-20 campaign, which will see the veteran squad take on one of the toughest three-tournament stretches in program history in the spring. 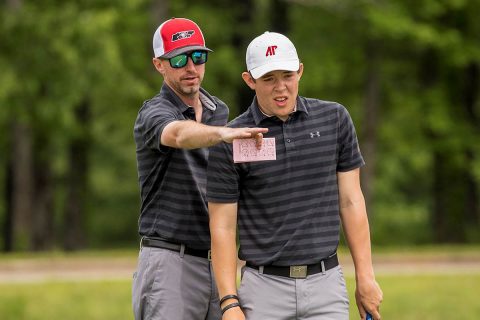 “We take pride in playing the strongest possible schedule and this year is no different,” Wilson said. “We want players to feel they can come into our program, be challenged each week and ultimately be better because of it.”

The fall slate kicks off September 9th-10th in Hattiesburg, Mississippi at Southern Miss’ Sam Hall Intercollegiate, the 17th annual iteration of the tournament often featuring some of the south’s preeminent programs in their first tournament of the fall. The Golden Eagles have won the previous two tournaments.

A week after their Illinois journey, the Govs will head to Sapphire Valley, North Carolina for the Hummingbird Invitational, a staple of Austin Peay State University’s fall schedule. Last season, Chase Korte [2] and Michael Busse [3] tied for 14th overall, with Busse closing out the tournament with a back-nine 33.

October heralds the annual F&M Bank APSU Intercollegiate, held for the third consecutive year at Greystone Golf Club in Dickson, Tennessee, October 14th-15th. Now in its 19th season, the event has attracted some of the best programs from not only the south but also northern schools looking for milder climates as the weather cools down. Austin Peay has taken the top spot in the event nine times and will challenge for its first home-tournament title since 2014.

For the second year in a row, the Govs will close the fall at the Pinetree Intercollegiate, hosted by Kennesaw State. The Pinetree Country Club, home to the event, was particularly good to Korte last season, as he closed the fall with a top-10 finish in the event.

The Govs will take a break for the winter after Pinetree, returning to action February 17th-18th in Weston, Florida for the Presidents Day Match Play Championship. Hosted by George Washington, this will be Austin Peay State University’s first foray outside of stroke play—an important component to bear in mind with the Ohio Valley Conference Championships set to involve a match play element (differing from stroke play by counting the strokes won by each side rather than the number of strokes taken) on the final day of competition to determine the ultimate champion beginning in 2020.

March heralds the toughest stretch of tournaments undertaken by the Govs during Wilson’s tenure. March 8th-10th, the Govs will return to the Auburn Invitational presented by Jason Dufner, which they appeared in for the first time last season.

After a nine-day hiatus, the Govs then turn their attention to the Linger Longer Invitational, a joint venture hosted by Kennesaw State and Mercer at The Landing at Reynolds Lake Oconee. Now in its 14th year, this event has attracted some of the heaviest hitters in golf—past champions include Georgia, Texas and Alabama, which has won five of the last nine team titles.

APSU closes out this challenging stretch at the Missouri Tiger Invitational, April 6th-7th. The last time the Govs made the trek to Missouri—helmed by former Austin Peay head coach Mark Leroux—was 2017, when Erik Hedberg’s [5] final-round 69 gave him a share of runner-up honors and helped the Govs attain a third-place team finish. Returning Governors Austin Lancaster [6] and Alex Vegh [7] were in the lineup as freshmen the last time the Govs visited Columbia, Missouri.

The Govs close the regular season with their first-ever appearance at the Big Blue Classic, hosted by Tennessee State, April 13th-14th. Following a week off, the Govs will be back at the Robert Trent Jones Golf Trail at the Shoals on the Fighting Joe course to battle for the 2020 OVC Men’s Golf Championship, April 26th-29th.

In addition to the traditional 54-hole stroke play atmosphere for the Sunday-Tuesday rounds, the top four programs will play a match play format on Wednesday to determine the ultimate champion.