NASA Scientists test out new methods of discovering life in California lava tubes that could one day be used on other worlds.

Silicon Valley, CA – NASA says imagine descending into a cave carved out by lava to work alongside a rover about the size of Spirit and Opportunity on Mars, watching the pristine wilderness of a national park transition into tall pillars and stalactites, all in a search for subterranean microbes.

That was a typical day for NASA’s Biologic and Resource Analog Investigations in Low Light Environments project, also known as BRAILLE, while on deployment. Operated out of NASA’s Ames Research Center in Silicon Valley, the BRAILLE team is developing the capability to detect life on the walls of volcanic caves from afar. 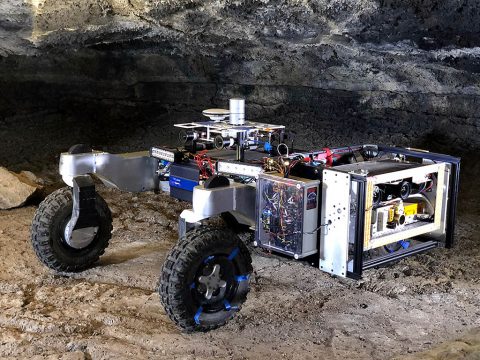 The CaveR rover preparing to search for life on the walls of a lava tube in Lava Beds National Monument in northeastern California. The rover’s instrumentation can be seen in the box on its right side. (NASA)

To do this, they’re venturing into North America’s largest network of lava tubes, with the goal of advancing efforts to search for life elsewhere in the universe.

Already, data from the team’s first field deployment is helping scientists understand the interactions between biology and geology in these volcanic caves. New science from the project will be presented this week at the Astrobiology Science Conference in Seattle.

Scientists predict that beneath the surfaces of Mars, Venus and even our own Moon are majestic volcanic caves, formed by flowing magma and covered in tiny crystals. These lava tubes can stretch for miles. 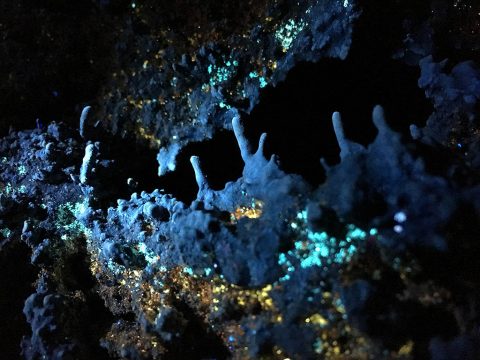 Ultraviolet light highlights different microbes in the caves, as seen by the green yellow, and orange colonies that drape below small mineralized finger-like structures that jut upward from a ledge in the cave, less than half an inch long. These structures, growing against gravity and formed by the interaction of rock, water and microbes, are biomineral markers that could persist for ages record signs of life in the rock record. (NASA)

On other planets with less gravity, some caves could even be large enough to fit small cities. For places like Mars too dry for life and with atmospheres too thin to block dangerous space radiation, lava tubes could safely harbor potential life.

But beyond helping us pinpoint the best spots to search for life, these caves could bring us one step closer to a permanent presence on the Moon and safe exploration at Mars – the ultimate goal of the Artemis program.

“We don’t think there’s life to find on the Moon now, but some day the life on the Moon might be us,” said Jennifer Blank, the principal investigator for the BRAILLE project at NASA Ames. “And if I were going to the Moon, I’d want to go to a lava tube.”

On Earth, these caves are home to complex ecosystems, all supported by microbes that “eat” rocks – converting rock material into energy for life. The scientists of the BRAILLE project believe such life could exist – or have once existed – in the caves of Mars as well.

“Orbital satellite data suggests that there are a lot of these lava tubes on Mars,” said Blank. “If there is life there, those tubes are a good place to look. And if there was life in Mars’ ancient past, that’s where it’s most likely to be preserved.”

The BRAILLE team’s first descent occurred at Valentine Cave, one of over 750 at Lava Beds National Monument in northeastern California, close to the state’s northern border. Smooth walls around 15 feet high and walkways up to 70 feet wide make it a practical place to drive a rover, and its well preserved lava flow features are similar to what we expect to find inside a Martian lava cave. 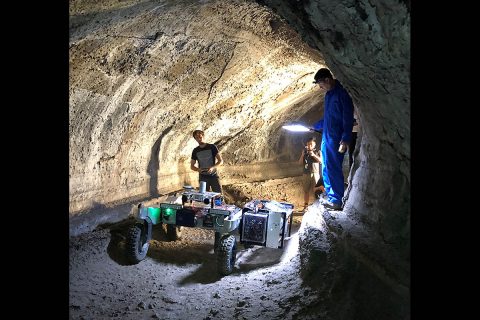 NASA’s robotics team drives the test rover, CaveR, into Valentine Cave at Lava Beds National Monument. The science instruments, visible in the box-like structure pointing to one wall of the cave, will begin testing further downstream in the cave. One of the CaveR engineers is perched on a lava ledge, a marker of one of the lava flows in the cave. (NASA)

With proper lighting, the cave’s layers of microbial material and mineral deposits can create a dazzling array of colors. But NASA’s cave rover, CaveR, is equipped to do more than sightsee; it’s outfitted with a host of scientific cameras and imaging tools. These instruments take in small amounts of light reflected off of the cave wall’s surface, allowing scientists to identify chemical components that reveal the telltale signs of life. The rover also uses a laser scanner to map the subterranean caves.

One of the most significant of their many results is a working theory the team calls the “Micro-Mineral Continuum,” describing how past and present microbial life appears in the caves.

Between two endpoints on this spectrum – from the walls being visibly bare rock to coated with colored films of microscopic life – are a range of different features, textures and secondary minerals created by the interactions of those microbes with the basaltic rock and water that drips down into the caves.

By studying the continuum further in future returns to Lava Beds and understanding the interplay between geology and biology in these caves, scientists will be able to know what they’re looking at when we one day send rovers to Martian caves.

On Mars, the enormous volcano Olympus Mons has left a sprawl of lava tubes surrounding its base. Venus is theorized to have plentiful and significantly larger lava tubes. The Moon’s own magma-filled history has left a network of lava tubes underneath its surface. Any rocky world, in our solar system or beyond, almost certainly has had volcanic activity in its history.

Understanding life in these lava tubes, and the mineral record this life imparts, could be the key to our search for life off of Earth. For places like Mars which likely once held life and could still today, understanding these caves and how to look for even the smallest traces of biology is essential. Even if there is no life on Mars today, caves could preserve the remains of ancient life for us to find.

But beyond whatever microbiology we hope to find, lava tubes could provide homes for humans as close as the neighboring Moon and Mars, and as far as the rocky planets orbiting distant stars. That journey starts here, camping with a rover in a cave on Earth, in our own backyard.