Nashville, TN – Nashville Sounds give up to big innings to the New Orleans Baby Cakes in 9-3 loss Sunday night at First Tennessee Park. The Baby Cakes scored four runs in the fifth and another three runs in the sixth on their way to victory.

New Orleans scored in the first inning on an RBI double by Isan Diaz that scored Eddy Alvarez. That would be the only run scored in the first three innings by either team. The Sounds were close to scoring in the bottom of the third inning when they loaded the bases. The Sounds were unable to take advantage as Baby Cakes’ starter Joe Gunkel struck out Matt Davidson to end the inning. 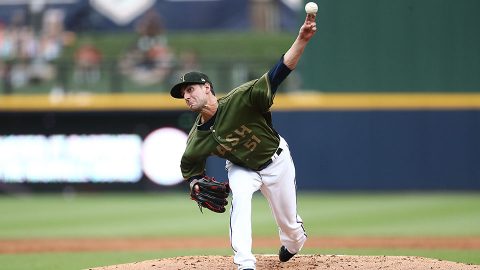 Patrick Wisdom hit a home run for a second consecutive night. This time it came in the bottom of the fourth to tie the game at 1. It was Wisdom’s 14th of the season.

The Baby Cakes regained the lead in the top of the fifth inning. Wilkin Castillo doubled to left field to score Peter O’Brien. Two more runs scored in the inning on a single by Alvarez, who later scored on an Austin Dean single to give New Orleans a 5-1 lead.

Three more runs were scored by New Orleans in the top of the sixth. O’Brien hit a solo home run to get the inning started. Gabriel Guerrero and Alvarez knocked in the two other runs to extend the New Orleans’ lead 8-1.

Another run wouldn’t be scored until the bottom of the eighth. Andy Ibanez scored on an RBI single to put the score at 8-2. New Orleans respond in the top of the ninth on a solo home run by Diaz, making the score 9-2.

Wisdom hit another home run in the bottom of the ninth but that would be all, as the Sounds lost to the Baby Cakes 9-3.

Patrick Wisdom’s two home runs tonight totals three in the past 24 hours. It was the third time a Sounds hitter had a multi-home run game, the last being when Wisdom had two on May 18 at Round Rock.

With the series split, the Sounds are now 6-12-4 in series results this season.

Nashville hits the road for a four-game series tomorrow in San Antonio tomorrow. First pitch is at 7:05pm, with Sounds’ right-hander Seth Maness (5-2, 4.97) facing Missions’ left-hander Gio Gonzalez (0-0, —). Gonzalez is making his first appearance with the San Antonio Missions on a rehab assignment.