Clarksville, TN – Junior quarterback Jeremiah Oatsvall [1] with the Austin Peay State University (APSU) has been named a nominee for the American Football Coaches Association’s Good Works Team® for his community service impact off the field. 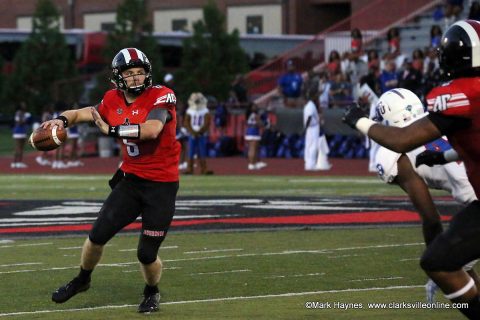 Oatsvall has emerged as leader on the team and has improved his game through his first two seasons, but his work off the field is why he’s been recognized by the AFCA. Oatsvall has been heavily involved with the 147 TEAM organization, started by his mother to provide critical needs to the 147 million-plus vulnerable children worldwide.

Through 147 TEAM, Oatsvall has helped move furniture and deliver food to the Napier Housing Projects in Nashville Tennessee. He also spearheaded a trip to Uganda in the summer of 2018 where he and six of his teammates poured cement for the foundation of a school, plowed fields by hand and laid fencing for local farmers. They spent time with the local children and assisted in their classrooms.

Oatsvall planned another service trip with his teammates this summer, doing similar work right here in the United States.

Additionally, Oatsvall has participated in Read Across America Day at local elementary schools and served as a peer mentor to incoming freshmen through the PEAYR Mentoring Program.

The Governors’ signal caller entered the 2018 as the media’s selection for Ohio Valley Conference Offensive Player of the Year and put his stamp on the APSU record book throughout the season. He accounted for 26 total touchdowns (20 passing, 6 rushing) last year, setting the program’s single season mark.

Oatsvall tossed a record-tying five touchdown passes in a victory against Tennessee Tech, and he became the first Governors quarterback to throw for four or more touchdowns in a game three times during one season.

In all, 22 student-athletes will be selected to the 2019 AFCA Good Works Team – 11 from the FBS level and 11 from FCS, Division II and Division III. The final 22-member team will be selected by a voting panel consisting of former Allstate AFCA Good Works Team® members and prominent media members who look for both their dedication to giving back and the embodiment of true leadership on and off the football field.

After the final team members are announced on September 12th, 2019, fans can vote for this year’s Allstate AFCA Good Works Team® captain through the official page on ESPN.com. Fans are also encouraged to join in the conversation by searching and using #GoodWorksTeam on their social media channels throughout the season.