San Antonio, TX – The Nashville Sounds lost a close one Tuesday night to the San Antonio Missions 6-5 at Nelson Wolff Stadium. San Antonio center fielder Trent Grisham hit a solo home run in the bottom of the eighth inning to give the Missions the win.

Grisham’s blast was off Nashville reliever Miguel Del Pozo and came with one out in the frame. It snapped a 5-5 tie in what was a back-and-forth game all night. 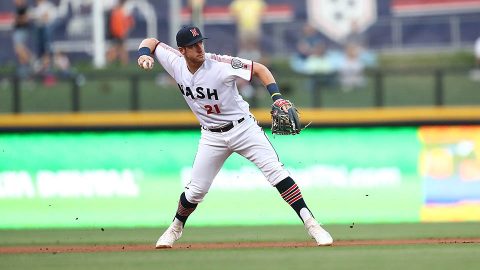 The scoring started immediately in the first when San Antonio’s Nate Orf knocked in a pair of runs with a single to center field.

Patrick Wisdom’s first hit of the night trimmed the deficit to 2-1 in the top of the second, but the Missions came back with a run of their own to extend the lead to 3-1. The same happened in the third when Matt Davidson’s RBI fielder’s choice netted Nashville a run, but San Antonio’s Lucas Erceg drilled a two-run homer off Payano to make it a 5-2 game.

In the fourth, Juremi Profar had an RBI double and Eli White came through with a run-scoring single to cut the deficit to one run at 5-4.

Relievers Tim Dillard and Kyle Dowdy kept the Sounds in it while the offense chipped away. The two bullpen arms tossed 3 1/3 scoreless innings to keep the game close. Zack Granite’s RBI double plated Jett Bandy in the sixth inning to tie the game at 6-6.

It stayed that way until Grisham’s homer off a 3-2 pitch in the bottom of the eighth gave San Antonio the lead.

Patrick Wisdom had two more hits for Nashville and is hitting .306 (11-for-36) in nine games in the month of July.

Zack Granite swiped his 17th base of the season and is now tied for seventh-most in the Pacific Coast League.

Eli White went 1-for-4 and extended his hitting streak to six games.