San Antonio, TX -The Nashville Sounds jumped out fast, but faded late in 5-3 loss to the San Antonio Missions Thursday night. That completed the sweep for the Missions over the Sounds.

Shelby Miller made the start for the Missions in his first pitching appearance since June 25th with the Texas Rangers before being released. He threw 40 pitches in the first inning and 28 pitches in the second inning. 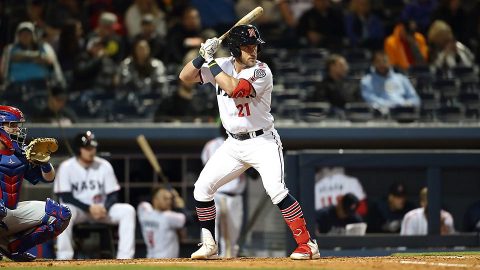 Although he didn’t allow a run in the second, Miller’s night was finished after being relieved by Jon Olczak in the third.

The Missions scored their first run in the third inning on two doubles. Trent Grisham hit the first double with David Freitas hitting a ground-rule double to pull San Antonio within a run at 2-1.

Nashville starter Wes Benjamin pitched well into the sixth inning. He faced two batters and was able to get one out before being relieved by Kyle Dowdy with a runner on second. San Antonio’s Troy Stokes was able to get the RBI hit against Dowdy to tie the game at 2.

San Antonio would take the lead in the bottom of the seventh inning on three hits. Grisham and Mauricio Dubon hit back-to-back singles and were able to advance on throws to put runners on second and third base with nobody out. Grisham scored on a wild pitch and Dubon crossed the plate on an RBI single by Cory Spangenberg to make the score 4-2.

Another run was scored by the Missions in the bottom of the eighth for an insurance run. After Jake Hager singled, he scored on a Grisham double to extend the lead 5-2.

The Sounds made things interesting with two outs in the ninth inning. Granite hit a solo home run to bring the game within two runs. Heineman singled and Eli White walked to bring Andy Ibanez to the plate as the potential go-ahead run. He could not get the runners in as the Sounds lost 5-3.

Zack Granite’s home run was his third of the season and just his 14th in his career.

The four-game sweep is the fourth time the Sounds were swept this season. They were last swept at Memphis from June 25th – 28th.

Granite, Scott Heineman and Eli White combined for a 6-for-12 effort, scoring all three runs.

Next Up Next For Nashville Sounds

The team returns to Nashville Friday night for a seven-day, six-game homestand. The Sounds will first host the Iowa Cubs in a three-game series. With first pitch at 7:05pm, left-hander Joe Palumbo (1-0, 3.38) will start for Nashville while right-hander Matt Swarmer (5-8, 5.76) will start for Iowa.