The 11-event slate will see the Govs defend their twice-won title at the Town and Country Invitational, as well as trek to new venues in Cathey’s first season at the helm. 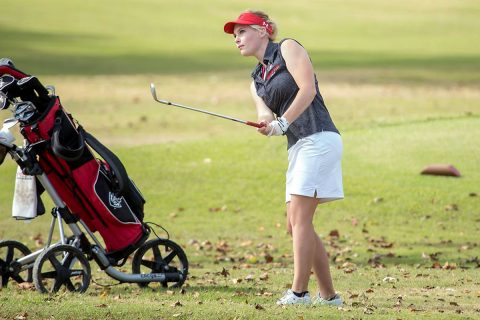 “This year will be full of new opportunities to show that we aren’t a team to be overlooked,” Cathey said. “We are excited to compete against strong programs at each event that will prepare us for the Ohio Valley Conference Championship.”

The Govs kick off the fall slate September 9th for the MSU Payne Stewart Memorial, hosted by Missouri State, before making their second trek in as many years to Lexington, Kentucky for the 2019 Greenbrier Invitational, hosted by Morehead State.

Last season, the Govs took runner-up honors at this event, with Taylor Dedmen [2] turning in a fifth-place finish in just her second collegiate tournament.

Following a week off, the Govs will host the annual F&M Bank APSU Intercollegiate, September 30th, at Clarksville Country Club. Now in its 21st year, the annual event has hosted some of the best programs in the southeast and consistently drawn a plethora of Ohio Valley Conference foes to Clarksville.

The back half of the fall schedule begins at the Chris Banister Golf Classic, which takes place October 7th. This will be the second year in a row the Govs have visited Glencoe, Alabama for Jacksonville State’s home event after not playing in it since 2014.

That will be followed a week later by a visit to Arkansas State—the Governors first visit to Jonesboro since 2009—for the Lady Red Wolves Classic before concluding the fall slate at the Town and Country Invitational in Nashville Tennessee, October 28th, hosted by Tennessee State at McCabe Golf Course. The Govs are the two-time defending champions of TSU’s home event.

The spring session opens March 1st at an event that last season billed itself as the largest collegiate golf tournament in the country. Taking residence on Kiawah Island Resort, the Kiawah Island Spring Classic used both Osprey Point and Oak Point courses in 2019 as the tournament welcomed 49 teams to South Carolina for the event.

While the Govs plans for spring break are still being finalized, APSU will conclude March at the Colonel Classic in Richmond, Kentucky. This scheduling staple will be Austin Peay State University’s sixth straight appearance in Eastern Kentucky’s home event—dating back so far that Cathey, as a senior, finished 11th in the 2016 iteration of the event.

NCAA Regionals are scheduled for May 11th, with the NCAA Championships slated for May 22nd in Tempe, Arizona at Grayhawk Golf Club.