Douei, a native of the African nation Ivory Coast, is a behavioral health specialist and has served in the Army for nearly two years. He was selected after competing with 14 other candidates from the hospital and outlying medical homes.

The Soldier of the Quarter Board was a rigorous two-day competition run by hospital NCOs. 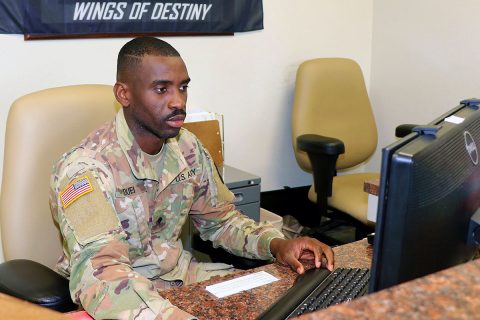 Spc. Mondeka Douei, a native of the African nation Ivory Coast, was named Blanchfield Army Community Hospital Soldier of the Quarter. Douei serves as a behavioral health specialist at the 101st Combat Aviation Brigade Embedded Behavioral Health Clinic. He was selected after competing with 14 other candidates from the hospital and outlying medical homes. (U.S. Army photo by Maria Yager)

“Congratulations to all the Soldiers who competed for the honor to be called Soldier of the Quarter. This experience will certainly make them better Soldiers,” said Command Sgt. Maj. Daniel Santiago, BACH command sergeant major. “Spc. Douei showed what right looks like and earned the right to compete for the hospital’s 2020 Soldier of the Year. Col. [Patrick T.] Birchfield and I are extremely proud of Spc. Douei’s accomplishment.”

This was the first Soldier of the Quarter board held at BACH since the arrival of Command Sgt. Maj. Santiago and he shared his observations of the program and the unique focus BACH NCOs put into the board.

“I was very impressed with the hard work and effort by all the support staff during the competition. Normally, in other locations, the NCOQ/SOQ winner is selected by conducting an oral board only, but the BACH NCOs went above and beyond and put together a two-day event similar to what you would see in an NCO and Soldier of the Year competition,” said Santiago.

The additional criteria added by the coordinators gives BACH Soldiers more experience that will serve them throughout their Army careers.

“Each time, we try to add another aspect of Soldier tasks to give the Soldiers more opportunities of readiness training,” said 1st Sgt. Lauren Morrell, BACH medical company first sergeant.

Douei will be recognized during an upcoming ceremony.

“Winning the competition was very important for me because my parents are visiting me from Africa next month and I wanted them to assist in the award ceremony. They have sacrificed a lot for me and my brothers to have better chances than they had, and I wanted to make them proud,” he said.