Nashville, TN – The Nashville Sounds fall Thursday night 8-5 to the El Paso Chihuahuas in the series finale. Eli White led the way for the Sounds offense with three hits.

A solo home run by Estaban Quiroz in the second inning was the first run of the game for El Paso. They scored two more runs in the third inning when Ty France hit a two-run single to make the score 3-0, Chihuahuas.

Three runs in the bottom of the fourth by Nashville tied the game up. Andy Ibanez led the inning off with a home run, his 13th of the season. Eli White hit a double that scored Nick Solak and White scored on an RBI single by Patrick Wisdom to tie the game at 3. 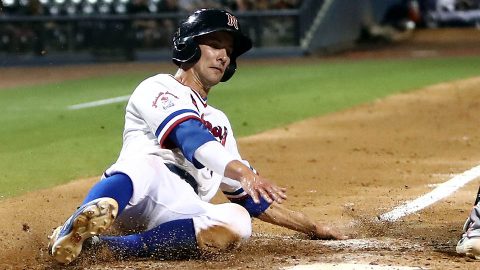 El Paso retook the lead in the top of the fifth inning with two runs. Boog Powell became France’s third RBI of the game and he scored on a Jason Vosler double to take the 5-3 lead.

The Chihuhuas scored three more in the sixth inning. Michael Gettys hit a solo home run and Boog Powell hit a two-run single to score Webster Rivas and Travis Jankowski. That pushed the score to 8-3.

The Sounds got a run back in the bottom of the sixth inning. Nick Solak hit an RBI double that scored Ronald Guzman to cut the El Paso lead 8-4.

One more run was scored for the Sounds in the bottom of the seventh inning. Ibanez hit an automatic double in to score Adam Moore. That would be all either team scored for the remainder of the game as El Paso beat Nashville 8-5.

Nashville starter Seth Maness allowed 15 hits tonight and earned the loss. The 15 hits allowed was a career-high for Maness. He also set the season team-high for Nashville, topping Tim Dillard who allowed 14 hits to Oklahoma City on June 30. The franchise record is 16 hits allowed by Jamie Werly on August 18th, 1981.

Eli White’s three hits tied his season-high, achieving the feat for a fifth time. The last time he did so was on June 24th at New Orleans.

Tomorrow begins the second part of the Nashville Sounds seven-game homestand with a four-game series versus Albuquerque. With first pitch at 7:05pm, right-hander Tim Dillard (6-8, 5.00) will start for Nashville versus Albuquerque’s left-hander Chris Rusin (1-2, 6.30).