Nashville Sounds pitcher Kolby Allard had an excellent game but the team was unable to hold back the Albuquerque Isotopes late in 8-4 loss at First Tennessee Park Saturday night.

In his organizational debut, Allard started and tossed five shutout innings. The left-hander limited the Isotopes to four hits and two walks while recording eight strikeouts. He threw 101 pitches in the no-decision.

A two-out Patrick Wisdom double in the bottom of the fourth inning sparked the first rally. Adam Moore followed and chopped a ball up the third base line for an infield single.

Josh Fuentes’ throw from third got away and allowed Wisdom to score the first run of the game. 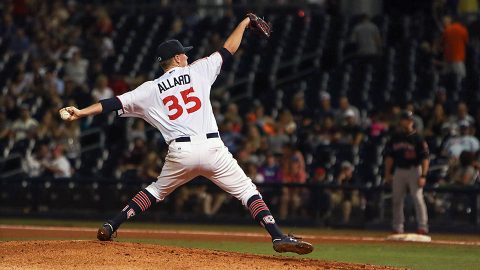 The Sounds padded their lead in the fifth when Matt Davidson crushed his 25th home run of the season. Davidson’s two-run shot to the Vanderbilt Health Picnic Place gave the Sounds a 3-0 lead.

Allard departed after five innings and trouble started. The first four Albuquerque batters reached against reliever Kyle Bird and the game was quickly 3-3. Pat Valaika doubled in a run and Roberto Ramos hit a two-run homer into The Band Box to even the game.

Fuentes kept the inning going with a single and Drew Weeks drilled a two-run home run to give the Isotopes a 5-3 lead.

Shane Carle relieved Bird for the seventh inning and the first four batters reached again. Albuquerque got hits in the inning from Sam Hilliard, Valaika, Ramos and Brian Mundell and extended the lead to 8-3.

Nashville had several chances with 13 hits in the game but went 2-for-17 with runners in scoring position and left 14 runners on base.

Matt Davidson extended his on-base streak to 22 games with a single in the first inning.

The Nashville Sounds game three of the four-game series against the Albuquerque Isotopes is scheduled for Sunday night at First Tennessee Park. Left-hander Joe Palumbo (1-0, 3.38) starts for the Sounds against right-hander Rico Garcia (0-3, 8.31) for the Isotopes. First pitch is scheduled for 6:15 p.m.