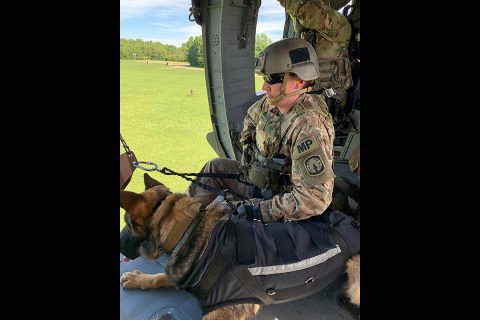 Sgt. Megan Hurley and MWD Bill, Spc. Bradley Caravello and MWD Thor, as well as Pvt. 1st Class Jacob Pickering and MWD Barbi are continuing to train hard prior to pushing out for deployment.

Sgt. 1st Class Floyd Bengtson, kennel master for the 510th Military Police Detachment is proud of the many hours and hard work the Soldiers have put in leading up to this point saying, “we are deploying three Patrol Explosive Detection Dog (PEDD) teams to the Middle East. These Soldiers and their dogs will often times find themselves as those first to step into danger so other Soldiers don’t have to.” 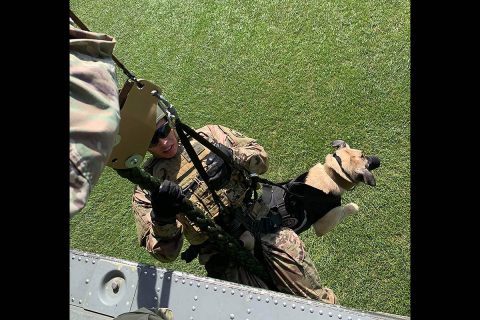 MWDs worldwide save lives each day by detecting explosive odors that humans are not able to detect on their own. Whether it be mines, improvised explosive devices (IEDs) or weapons caches, these PEDD teams are trained to alert the handler that explosives are present, ensuring the safety of other Soldiers.

Sgt. Megan Hurley, a native of Belmar, New Jersey, and handler for MWD Bill is excited to be finishing up the last preparations before deploying to Iraq.

“Our unit trains the dogs and Soldiers really hard to make sure that we field nothing but the best overseas,” Hurley remarks.

She goes on to say, “I’m really excited to see our training culminate now and deploy. When you show up to work knowing that your mission is important and that just you and your MWD can make a difference overseas, that is really motivating and empowering.”

The 510th MP Det. frequently incorporates urban terrain, tunnels, and scenario based training in order to prepare MWD teams for any situation they might encounter overseas.

The Kennel Master, Bengtson speaks on how he prepares teams for deployment saying, “we’re always introducing new environments to challenge our MWD teams. Training here on Fort Campbell is really great because there’s a wide variety of training sites and terr
ain we can take advantage of.”

For 2018, the 510th Military Police Detachment was recognized with the Eagle Award as the “Best Military Working Dog Detachment in United States Army Forces Command.” Both drug and explosive detection dogs provide support to law enforcement operations on Fort Campbell on a continuous basis.

In addition, 510th MP’s MWDs are frequently asked to support United States Secret Service missions and provide detection capabilities on details for the President and Vice President throughout the nation.

Whether at home or abroad, the MWDs of the 510th are ready to serve.