Sacramento, CA – The Nashville Sounds crushed a season-high six home runs on Saturday night, including two more from Patrick Wisdom, and routed the Sacramento River Cats 13-3 in the opener of a four-game set at Raley Field. The Sounds are 4-0 so far on their seven-game California road trip and haven’t trailed at any point.

The game was tied 1-1 in the third when the Sounds began their home run barrage. Andy Ibanez and Nick Solak each hit a two-run homer off Justin Haley to make it 5-1. Then Wisdom homered for the sixth consecutive game, going back-to-back with Solak for a 6-1 advantage. Zack Granite later added an RBI single in the six-run frame. 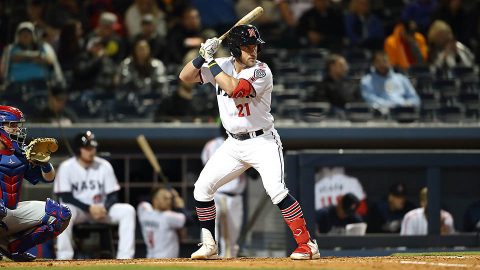 Leading 7-3 after six innings, the Sounds added three two-run homers over the final three innings to break open the game.

Christian Lopes nailed one in the seventh, Scott Heineman smashed one in the eighth, and Wisdom capped off the big night with a two-run blast in the ninth.

Wisdom has eight homers over his amazing six-game stretch and 20 homers in his last 41 games. Starter Wes Benjamin was the beneficiary of the run support, notching the win while giving up three runs over seven strong innings in his second consecutive quality start.

Nick Solak and Patrick Wisdom have been the tandem each of the last two times the Sounds have hit back-to-back homers (also July 19th).

Scott Heineman owns a 13-game hitting streak as a Sound.

The Sounds are 13-12 against the Pacific Conference this season.

The four-game series continues Sunday afternoon at 3:05pm CT. Tim Dillard (7-8, 4.86) is scheduled to start for the Sounds against a starter to be announced for Sacramento.