Jett Bandy fired up the offense in the second inning when he hit the first of three solo home runs by Nashville on the night. Bandy’s 10th of the season gave the Sounds a 1-0 lead. 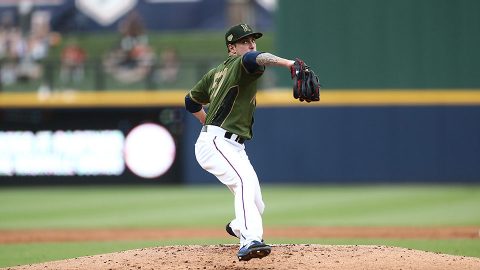 Eli White hit the second home run of the night in the fourth. The solo shot of Omaha starter Jake Kalish was White’s 14th of the season and made it a 2-0 game.

Andy Ibanez and Ronald Guzman teamed up to put Nashville’s third run on the board in the fifth. Ibanez ripped a double to the gap in left-center and scored moments later when Guzman dropped a single into left field to extend the lead to 3-0. Guzman finished 3-for-4, his second three-hit game with Nashville.

Joe Barlow relieved Palumbo and allowed Omaha’s first hit of the night – a double off the bat of Erick Mejia to start the seventh. Chase d’Arnaud got the Storm Chasers on the board with a run-scoring groundout.

Nashville’s third blast of the game came off the red-hot bat of Nick Solak in the home half of the seventh. His solo homer to right-center gave the Sounds a 4-1 lead. Solak went 2-for-4 and extended his hitting streak to 15 games with a single in the third.

Barlow went 1 2/3 innings and Jake Petricka and Reed Garrett worked the final 1 1/3 to lock in the win.

Jett Bandy’s home run in the second inning extended Nashville’s home run streak to 16 games. Eli White and Nick Solak later homered to give the Sounds 30 in the 16-game stretch.

The 2019 season is the 42nd in Nashville Sounds franchise history and first as the Triple-A affiliate of the Texas Rangers. Single-game tickets are available now by calling (615) 690-4487 or by visiting www.nashvillesounds.com [2].