Nashville, TN – The Houston Oilers and Boston Patriots were charter members of the American Football League in 1960. In the league’s inaugural season, the Oilers swept both games, winning 24-10 in New England and 37-21 in Houston. The teams met 20 times as part of the AFL (1960-69), with the Patriots earning a 10-9-1 advantage.

Upon the AFL-NFL merger in 1970, the Oilers moved to the AFC Central Division, and the Patriots began play in the AFC East. They officially became the New England Patriots in 1971. 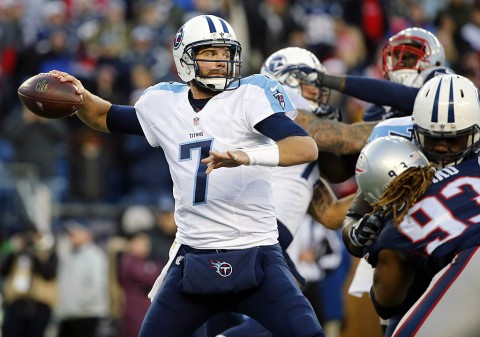 Tennessee Titans quarterback Zach Mettenberger (7) throws under pressure during the second half of the New England Patriots 33-16 win over the Tennessee Titans at Gillette Stadium on December 20th, 2015. (Winslow Townson-USA TODAY Sports)

Since 1989, the New England Patriots and Tennessee Titans have met 13 times, and all but four of those games were played in New England.

Most recently, the eventual Super Bowl Champion Patriots visited Tennessee in Week 10 of the 2018 season.

The last time the Titans traveled to New England in the regular season was December 20th, 2015. Mariota’s rookie season came to an end with an injury during the game, and the Patriots used three turnovers and five sacks to prevail 33-16. Tom Brady passed for 267 yards and two touchdowns in the New England victory.

There have been three all-time postseason meetings between the organizations, most recently in the 2017 Divisional round. Following a victory in the first round at Kansas City, the Titans traveled to face the top-seeded Patriots and fell by a final score of 35-14.

In a 2003 AFC Divisional playoff at Gillette Stadium, which was then the coldest game in Oilers/Titans history (4 degrees at kickoff), the Titans fell to the Patriots by a final score of 17-14. The game was tied at 14 going into the fourth quarter, but Adam Vinatieri booted a 46-yard field goal with four minutes to play that would prove to be the game-winner.

Tennessee had a shot at the end as Drew Bennett caught two passes from Steve McNair in the final two minutes, but a third pass to Bennett fell incomplete on fourthand-12, ending the drive. New England advanced to the AFC Championship and ultimately won Super Bowl XXVIII.

In a 1978 Divisional playoff contest, the Oilers traveled to Schaefer Stadium and advanced to the AFC Championship with a 31-14 win, courtesy of three touchdown passes by Dan Pastorini and 118 rushing yards by Earl Campbell.

There have been six previous preseason meetings between the Titans and Patriots, with the Titans taking each of them. Their most recent preseason matchup was a 27-24 Titans victory at Gillette Stadium in 2007.

The Titans fall to 0-6 on the season before beginning a five-game winning streak two weeks later after the bye. Unexpected snow blankets the Gillette Stadium field during pregame. Tom Brady passes for 380 yards and six touchdowns, including five in the second quarter and three to Randy Moss. Chris Johnson rushes for 128 yards on 17 carries for the Titans. The Patriots defense holds the Titans to minus-seven net passing yards.

Jake Locker records his first NFL start and completes 23 of 32 passes for 229 yards, one touchdown and one interception. Patriots get 236 passing yards and two touchdown passes from Tom Brady and add 125 rushing yards from Stevan Ridley.

Marcus Mariota is knocked out of the game in the second quarter with a knee injury, and Zach Mettenberger comes on to complete 20 of 28 passes for 242 yards and two touchdowns. Tight end Delanie Walker scores two touchdowns. Tom Brady leads the Patriots with 267 yards and a pair of touchdown passes. The Patriots produce five sacks and force three turnovers, including a fumble recovery for a touchdown, helping them build a 24-3 lead in the first half.

The Titans score 17 points in the first quarter and never trail in the contest. Marcus Mariota passes for 228 yards with touchdown passes to tight end Jonnu Smith and receiver Corey Davis. Davis totals 125 yards on seven catches. Derrick Henry rushes for two touchdowns. The Titans defense shuts out the Patriots in the second half and for the game limits the Patriots to 40 rushing yards on 19 attempts. The Titans sack Tom Brady three times and hold him to a 70.6 passer rating.