Nashville, TN – The Nashville Sounds were tied 3-3 with the Omaha Storm Chasers when in the bottom of the eighth, Tim Federowicz cranked his first home run of the season to give the team a 4-3 lead and the win.

The first run of the game was scored by the Sounds in the bottom of the first inning. Nick Solak led off with a single to extend his hitting streak to 17 games. After a Ronald Guzman walk, Solak scored on an RBI single by Matt Davidson for the Sounds’ early 1-0 lead.

Solak also led the third inning off with a single and Andy Ibanez followed him with his own single to make it first and third with nobody out. Solak scored after Guzman grounded into a double play. It was then 2-0, Nashville. 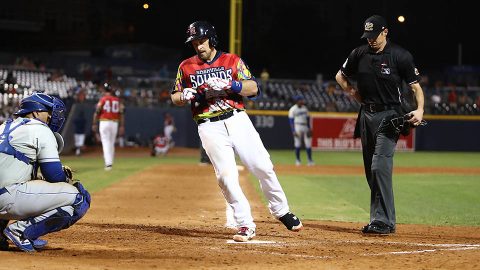 Omaha scored their first run in the top of the fourth inning. Former Sound Chase d’Arnaud hit a two-out single. On a hit-and-run, d’Arnaud scored on an RBI double Erich Weiss to cut Nashville’s lead 2-1.

The Storm Chasers tied the game at 2 in the top of the sixth inning on three singles. Erick Mejia led off with the first single and Kelvin Gutierrez followed to put runners on first and second. Mejia scored after d’Arnaud dropped in his third single of the game.

Nashville came right back in the bottom of the sixth inning to take the lead. Eli White led off with a walk and advanced to second on a wild pitch. Federowicz walked and Solak walked to load the bases with one out. Omaha brought in Andres Machado to halt Nashville’s offense but Ibanez was able to ground into a fielder’s choice to score White. It was then 3-2, Nashville.

The game was tied again by Omaha in the top of the eighth inning. After Jorge Bonafacio walked, he scored on a double by Gutierrez to tie things up at 3.

Federowicz made the magic happen in the bottom of the eighth inning. With one out, he blasted a solo home run on top of the Hyundai Deck to grab the 4-3. Reed Garrett came in to close in the ninth inning to seal the victory.

The Sounds are now 14-5 when Seth Maness starts on the mound.