“The fall schedule highlights for our men are the home tournament [The APSU Hidden Duel] and the NCAA ITA Regional tournament which will have use facing the best universities in the region,” said Brown. “The spring season is long, starting in January, going through April and hopefully into May.” 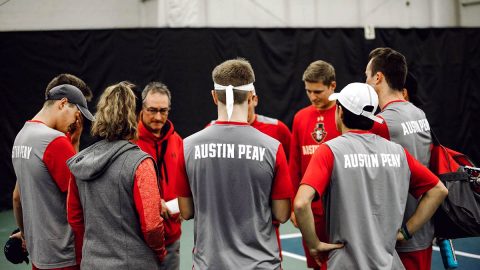 The Austin Peay State University men’s tennis team kicks off the fall portion of the schedule by hosting the APSU Hidden Duel (October 4th-5th). After hosting their own event, the men travel to the state of Kentucky for the Louisville Fall Invitational (October 11th-13th).

A trip to Nashville is next on the schedule when the Govs take part in the Ohio Valley Regionals (October 24th-29th). Finally, the Govs will travel to Chattanooga to compete in the UTC – Steve Baras Fall Invitational (October 31st – November 3rd) to concluded play in 2019.

The Governors start the spring portion of their schedule by making their second trip of the season to Louisville (January 18th). Middle Tennessee (January 20th) and Lipscomb (January 24th) are up next as the Govs hit the road to take on two in-state opponents. January comes to a close when the Govs host back to back home matches against Chattanooga (January 25th) and Illinois State (January 31st).

A quick trip to Dayton, Ohio, to take on Wright State (February 8th) is next on the schedule before the Govs return for their longest home stand of the season. The Govs kick off a three-match home stand on Valentine’s Day against Carson Newman (February 14th), with Cumberland (February 18th) and North Alabama (February 22nd) making up the back end of the home stand.

The Governors wrap up the month of February with a trip to Indianapolis to take on IUPUI (February 29th).The Dayton Flyers (March 1st) make the trip to Clarksville to wrap up the Govs nonconference schedule.

Jacksonville State (March 20th) makes the trip to Clarksville for the Govs first home conference match, before the Govs make another trip to Nashville, this time to play Belmont (March 21st).  The regular season comes to an end with one last home match against Eastern Illinois (April 3rd), and finally a trip to Cookeville to take on Tennessee Tech (April 11th).