Pasadena, CA – NASA has announced the mission to explore Jupiter’s moon Europa is a go.

An icy ocean world in our solar system that could tell us more about the potential for life on other worlds is coming into focus with confirmation of the Europa Clipper [1] mission’s next phase. The decision allows the mission to progress to completion of final design, followed by the construction and testing of the entire spacecraft and science payload. 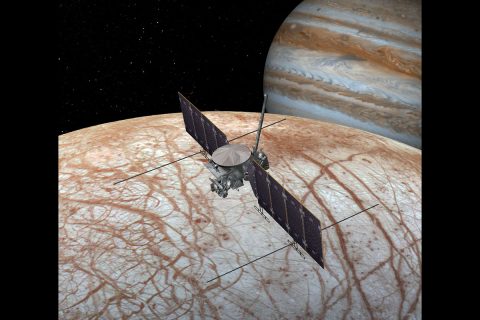 A 2016 artist’s concept of the Europa Clipper spacecraft. The design is changing as the spacecraft is developed. (NASA/JPL-Caltech)

“We are all excited about the decision that moves the Europa Clipper mission one key step closer to unlocking the mysteries of this ocean world,” said Thomas Zurbuchen, associate administrator for the Science Mission Directorate at NASA Headquarters in Washington.

“We are building upon the scientific insights received from the flagship Galileo and Cassini spacecraft and working to advance our understanding of our cosmic origin, and even life elsewhere,” Zurbuchen stated.

The mission will conduct an in-depth exploration of Jupiter’s moon Europa and investigate whether the icy moon could harbor conditions suitable for life, honing our insights into astrobiology [2]. To develop this mission in the most cost-effective fashion, NASA is targeting to have the Europa Clipper spacecraft complete and ready for launch as early as 2023. The agency baseline commitment, however, supports a launch readiness date by 2025.