Oklahoma City, OK – Nashville Sounds pitcher Tim Dillard threw seven strong innings, and Ronald Guzman went 4-for-4 with three extra-base hits on Wednesday night, as the Sounds cruised to a 7-2 victory over the Oklahoma City Dodgers at Chickasaw Bricktown Ballpark. The Sounds improved to 14-5 in August and have won 12 of their last 14 games. The victory gave them a fourth straight winning series.

The Sounds never trailed in the game, taking a 3-0 lead in the second inning on a three-run homer by Jett Bandy. 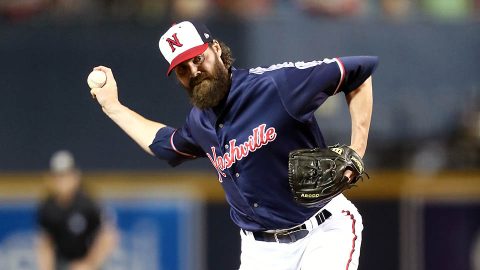 The Sounds have homered in 22 consecutive games with a total of 42 during the streak. Guzman, who had doubled and singled in his first two at-bats, doubled again in the fifth and later scored on a wild pitch by Logan Bawcom, giving the Sounds a 5-0 lead.

Then Guzman belted an opposite-field homer in the seventh, and the Sounds made it 7-2 in the eighth with a pair of unearned runs from four Dodgers errors in the frame.

Dillard’s outing was his sixth quality start in his last seven tries and came with the Sounds’ bullpen overworked from the first two games of the series and a suspended game that was completed Tuesday. He gave up two runs on seven hits over seven innings in the win. Yohander Mendez continued the dominant pitching by striking out the side in order in the eighth, and Reed Garrett worked a scoreless ninth to end it.

Tim Dillard entered Wednesday’s game ranked 4th in the PCL in innings and 7th in ERA.

Andy Ibanez drove in a run but snapped a nine-game hitting streak and 20-game on-base streak.

The Sounds’ streak of four consecutive winning series is a season-high.