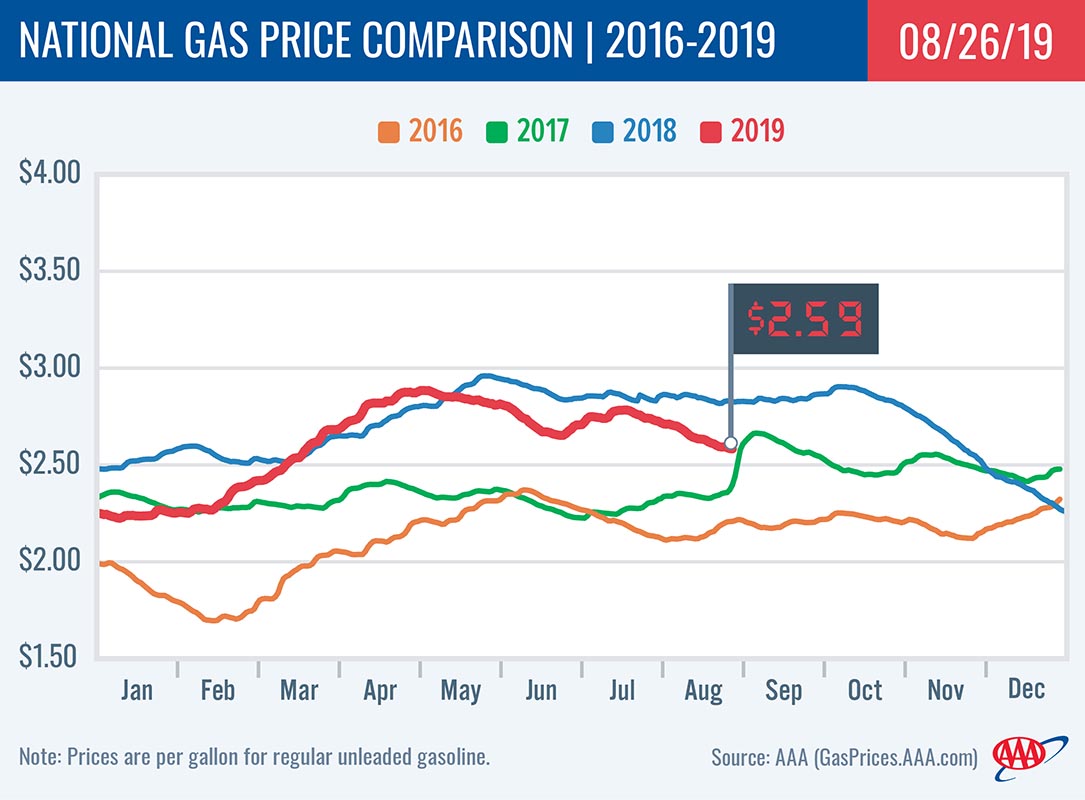 “For Americans who bookend summer with road trips, they will find gas prices this coming weekend that are cheaper than this past Memorial Day and last year’s Labor Day holiday,” said Jeanette Casselano, AAA spokesperson. 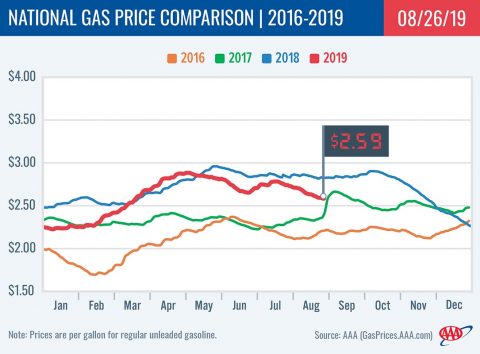 “At the start of the week, two-thirds of all states have gas price averages that are nearly a quarter cheaper than last year,” Casselano stated.

While some states may see gas prices increase by a few pennies ahead of the holiday weekend, which isn’t atypical, any jumps will be short-term.

Gas prices are cheaper across the Mid-Atlantic and Northeast states by as much as a nickel, but that large drop only happened for one state: North Carolina (-5 cents). New Jersey (-4 cents) saw the second largest decline followed by these four states with a three-cent weekly decrease: Virginia, Pennsylvania, Tennessee and Maryland.

But the real savings for motorists in region is compared to this time last year – gas prices are at least 19 cents cheaper. Heading into Labor Day weekend last year, state gas price averages ranged from $2.59 – $3.03 whereas this year they are $2.29 – $2.79.

Despite a 1% dip in regional refinery utilization, gasoline stocks built by 781,000 bbl, per the Energy Information Administration (EIA). This is the fourth straight week that utilization fell, yet three straight weeks of stock increases. As previously reported, imports are easing concerns related to the decline in utilization due to the pending closure of a regional refinery. Stocks sit at a nearly 1 million bbl deficit compared to this time last year.

Gas prices in the South and Southeast region have dipped to or below the $2.25/gallon mark for some states, which also tout the cheapest prices in the country today: Mississippi ($2.20), Louisiana ($2.20), Alabama ($2.23) and South Carolina ($2.23). More states in the region are likely to see averages this low in coming weeks.

In fact, AAA expects by year-end that the region will again see $2.00/gallon retail prices. Currently, New Mexico ($2.48) and Georgia ($2.41) carry the most expensive averages in the region.

On the week, all states in the region have gas prices that are cheaper by two cents to a nickel. Florida (-5 cents) saw the largest weekly decline.

The EIA reports that regional gasoline stocks drew by a little more than 1 million bbl. However, overall levels sit at a very healthy 83.2 million bbl and therefore gas prices are poised to continue to push cheaper. 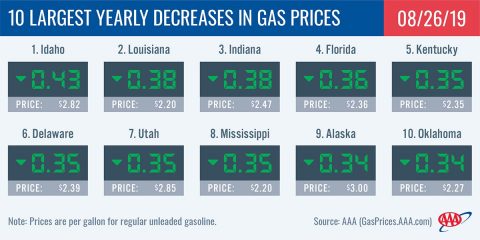 While Indiana (-10 cents) had the largest and only double-digit pump price decrease on the week in the region and the country, the majority of Great Lakes and Central states, saw pump prices push cheaper by as much as three cents. At $2.70, Michigan’s average increased two cents on the week and was one of only two states in the country to see an increase.

All states in the region are averaging a year-over-year pump savings of 20 cents or more except Illinois (-13 cents), which is at the lowest end of the price drop spectrum in the region.

With a 1 million bbl build, gasoline stocks increased for a third week and sit at their highest level since early April of this year, according to EIA data. Regional refinery utilization held strong at 99%, indicating that the region should expect cheaper gas prices next month with one stipulation being any refinery maintenance planned for this fall.

On the week, gas prices declined 1 cent – 3 cents in the region. Colorado ($2.54) has the cheapest gas price average of all five states in the Rockies region while Utah ($2.85) and Idaho ($2.82) carry the most expensive.

The latter two states rank as the 7th and 8th most expensive states in the country, however, they still land on the top 10 list for largest yearly changes, with differences of 43 and 35 cents less expensive, respectively.

Regional refinery utilization jumped back up to 100% in EIA’s data for the week ending Aug 16. Alongside the increase in utilization, stocks built by 200,000 to total 7.6 million bbl, the highest level since before Memorial Day. And with the end of summer tourism, stocks are likely to increase and push prices cheaper.

Motorists in the West Coast region are paying the highest pump prices in the nation, with all states in the region landing on the top 10 most expensive list. Hawaii ($3.64) and California ($3.57) are the most expensive markets in the country.

Other states in the region are seeing the following prices: Washington ($3.21), Nevada ($3.13), Oregon ($3.05), Alaska ($3.00) and Arizona ($2.81). State averages in the region have decreased on the week by as much as three cents, except in Arizona, which saw a three-cent increase since last Monday and is one of only two states in the country to see pump prices push more expensive.

The EIA’s report for the week ending on August 16th showed that West Coast gasoline stocks decreased slightly from 30.2 million bbl to 29.6 million bbl. Additionally, the report showed regional refinery utilization rose to 96.6% giving an indication of future production capability. If there is a supply disruption or increase in demand this week, pump prices in the region could increase moderately because of tighter stock levels.

At the close of Friday’s formal trading session on the NYMEX, WTI decreased by $1.15 to settle at $54.17. Crude prices strengthened after the EIA revealed that total domestic crude inventories fell by 2.7 million bbl. Then on Friday, crude oil prices took a downward turn as a result of continued trade tensions between the U.S. and China. Reuters reported that oil prices fell more than 2% on Friday after China unveiled retaliatory tariffs against $75 billion worth of U.S. goods.

In response, President Trump tweeted that he would raise tariffs on $250 billion in Chinese goods from 25 to 30 percent on October 1st. He also added that a tariff announced earlier this year and scheduled to go into effect on September 1st would now be raised to 15 percent. Market watchers will keep a close eye on U.S.-China trade talks and the impact increasing tariff costs could have on global crude oil demand. If the trade tension between the countries continues, crude prices will likely decline further.