Adalberto Mondesi, Chase d’Arnaud and Erich Weiss had triples and Rudy Martin added a double as the Storm Chasers opened an early 4-0 lead.

Nashville got a run back in the second and trimmed the deficit to 4-1 when Jett Bandy lined a two-out single to right-center to score Matt Davidson. 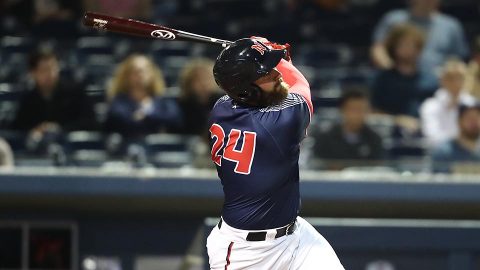 As they did all night, Omaha had an answer to Nashville’s rally. Jorge Bonifacio started the bottom of the third with a double and later scored on a sacrifice fly by Weiss to extend their lead to 5-1.

Dillard eventually settled in and tossed 5 2/3 innings, but the offense couldn’t erase the early deficit. Davidson’s huge night at the plate continued in the fifth when he knocked in Andy Ibanez to make it a 5-2 game.

Omaha’s lead was extended to 6-2 before Davidson clubbed his 30th home run of the season in the top of the eighth. He finished the night 3-for-3 with 3 RBI, 2 runs scored and 2 walks.

Trailing 8-3 going to the top of the ninth, the Sounds made it interesting by bringing the tying run to the plate. Ronald Guzman and Davidson drove in runs to make it a three-run game, but Omaha reliever Andres Machado got out of the jam by getting Patrick Wisdom to ground out sharply to third to end the game.

Dillard was charged with the loss, his ninth of the season. He allowed six runs on nine hits and struck out five in the setback.

Matt Davidson drilled his 30th home run of the season tonight. He is the eighth player in Nashville Sounds history to hit at least 30 homers in a single season.

Davidson drove in three runs to bring his season RBI total to 91. He is now tied with Anthony Garcia (2018) and Dan Pasqua (1984) for the 10th-most RBI in Nashville Sounds single-season history.

The Sounds have lost back-to-back games for the first time since July 23rd and 24th vs. Oklahoma City.

Game three of the four-game series is scheduled for Wednesday night in Omaha. Left-hander Wes Benjamin (6-6, 5.72) starts for Nashville. Omaha has not named a starter. First pitch is scheduled for 7:05pm.