Clarksville, TN – In the span of two weeks at Austin Peay State University (APSU), two remarkable discoveries of long-forgotten items opened a torrent of memories for two professors with decades-old ties to the school.

The first discovery happened on August 1st, 2019 when an electrician’s assistant working in Kimbrough Building found a billfold that had been missing since 1987. 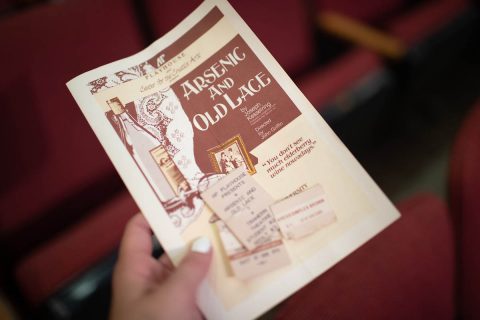 A carpet installer on Aug. 16 found a 31-year-old playbill and tickets while renovating the seating in an Austin Peay State University TV studio. (APSU)

His actions quickly reunited the billfold with retired education professor Dr. Harriett McQueen, who hadn’t seen the wallet since it was stolen from her office – down the hall from the men’s restroom where it was found 32 years later.

The second finding happened on August 16th, when a carpet installer working in a Music/Mass Communication Building TV studio found a playbill and ticket from a 1988 Austin Peay play. His actions quickly landed the “Arsenic and Old Lace” playbill in the hands of communication professor Dr. Tracy Nichols, who starred in the play 31 years ago.

“It’s just insane to me that two things like that, in buildings next to each other, happened,” said Nichols, whose office is steps from where the worker found the playbill trapped in a row of reclaimed Trahern Theatre seats. “Isn’t it crazy how life puts you places because as a theatre major in 1988, I would have never thought that this where I would be?

“Here I am, and the playbill was there all this time,” she added. “Life puts you on a path, and I think you end up where you’re supposed to be.”

Trapped In Seat For Three Decades 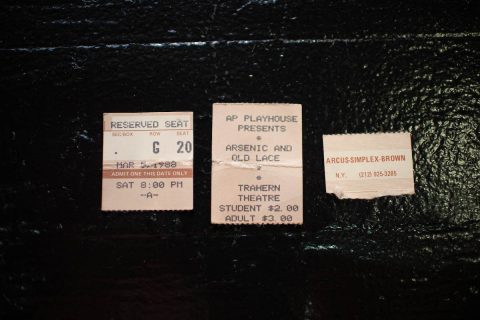 A carpet installer on Aug. 16 found a 31-year-old playbill and tickets while renovating the seating in an Austin Peay State University TV studio. (APSU)

N&J Flooring’s Jeremy Tipton discovered the playbill and tickets quite by accident.

While renovating the stage in the TV studio, he removed a row of old seats brought over years ago from Trahern Theatre.

“I’m unbolting all the chairs and that whole row tipped over on me,” Tipton said. “I went to pick it back up and the red cushion of the chair came out, and the playbill and ticket fell out.”

Tipton noticed the date on the ticket – March 5th, 1988 – and set aside the playbill and tickets to give to communication professor Dr. David von Palko. The ticket is for Row G, Seat 20. Tipton found the ticket in Seat 19.

Von Palko immediately recognized the playbill’s worth – and the lead actor’s name.

“Tracy Shearon. Now she is Dr. Tracy Nichols, one of our faculty members. 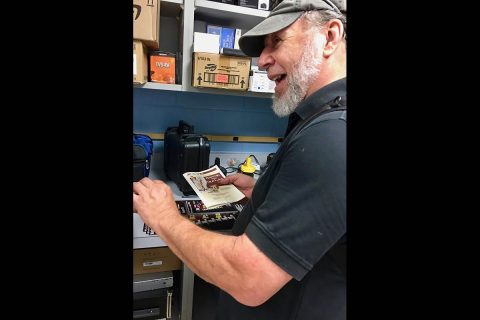 “Those seats were pulled out and moved over here,” von Palko added. “Countless butts have been in those seats over there and over here. Thirty-one years that playbill and ticket have been stuck in those chairs.”

When von Palko showed the playbill and ticket to Nichols, “it was a 31-year flashback.” 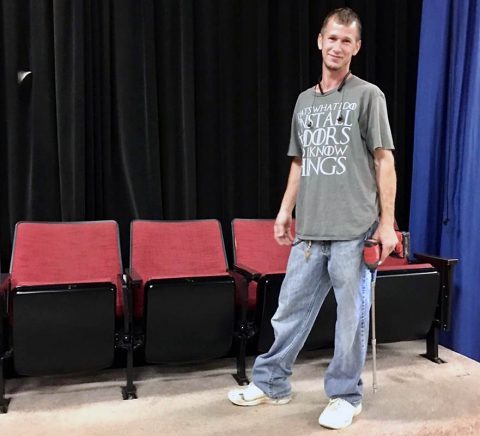 N&J Flooring’s Jeremy Tipton discovered the playbill and tickets when a row of old Trahern Theatre seats toppled on top of him. (APSU)

“It brought back a lot of memories from that specific production,” Nichols said. “It brought a flood of all these wonderful memories – and memories of lessons that I shared later.”

Nichols was a junior theatre major in the spring semester of 1988 when she starred as Abby Brewster in “Arsenic and Old Lace.”

“I learned so much from that show as a young theatre major,” she said. “Those experiences in the theatre program were so valuable to me. They gave us such a rich opportunity. I took advantage of every opportunity I was given, and it helped me to the life I have now. It all started in that department and that program.”

Nichols was a professional actor and director when she returned to her alma mater as an adjunct professor in 2004 and completing her graduate work. She became a full-time faculty member in 2007 and teaches undergraduate and graduate communication classes as well as study abroad and service-learning courses.

“You don’t have to go to a big school to get the things you need to be successful,” she said. “You can find it right where you are.”

But What About The Billfold? 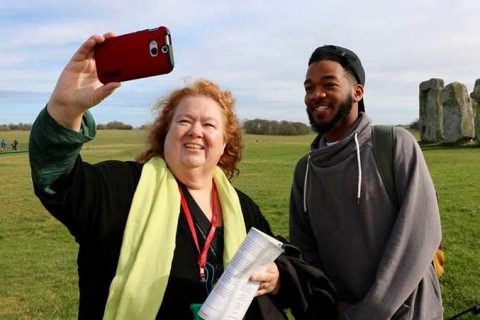 Dr. Tracy Nichols says the playbill’s discovery “brought a flood of all these wonderful memories.” (APSU)

The story about Dr. Harriett McQueen’s missing billfold was broadcast by media across the state. You can read our original story here [3].

For more about the APSU Department of Theatre and Dance, visit www.apsu.edu/theatre-dance. [4]

For more about the APSU Department of Communication, go to www.apsu.edu/communication. [5]