Nashville, TN – Nashville Sounds Patrick Wisdom hit a go-ahead solo home run in the bottom of the eighth inning to lead the team to a 6-5 win over the San Antonio Missions in front of a sellout crowd of 10,632 fans Friday night at First Tennessee Park.

Wisdom’s mammoth homer to left-center was his 30th of the season. The 30 home runs are tied for the eighth-most by a Sounds player in single-season team history.

David Carpenter came in for the top of the ninth and faced the minimum to earn his 21st save of the season. The 21 saves for Carpenter is the seventh-most in single-season team history. 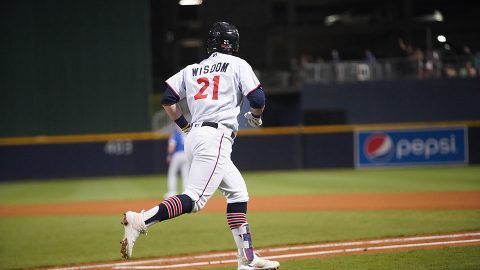 San Antonio cut the lead in half with a pair of runs in the top of the second. Nashville answered immediately in the home half of the second when Andy Ibanez cranked his 18th home run of the season to give the Sounds a 5-2 lead.

Trouble started in the seventh when San Antonio’s Troy Stokes Jr.’s RBI double trimmed the Nashville lead to 5-3. The Missions got two more runs in the top of the eighth off Kyle Bird when Tyrone Taylor homered and Tuffy Gosewich knocked in the tying run with a groundout.

It didn’t stay tied for long as Wisdom’s blast started the bottom of the eighth.

Ronald Guzman extended his on-base streak to 17 games when he drew a walk in the first inning. He’s hitting .358 (24-for-67) during the streak.

Patrick Wisdom hit his 30th home run of the season in the eighth inning. The 30 home runs are tied for eighth-most by a Sounds player in single-season team history (Drew Denson, 1994).

David Carpenter earned his league-leading 21st save of the season. It’s the seventh-most in single-season team history.

The Sounds improved to 16-5 in Friday games.