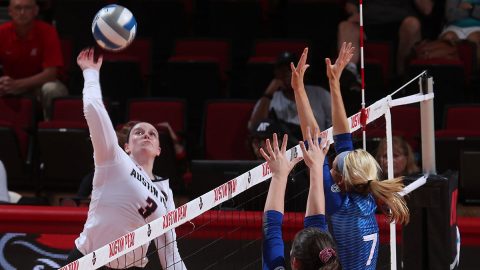 After dropping the first set, the Govs would use a 5-0 run midway through the second set to take a 13-12 lead.

A few points later, Austin Peay pieced together another 4-0 run, including a Chloe Stitt [3] kill that gave it the lead for good at 15-14. Stitt would later seal the Set 2 win with a kill.

Kansas State powered its way to a Set 3 win in near wire-to-wire fashion but Austin Peay bounced back in the fourth set. The Govs scored the first three points of the frame and raced out to a 7-2 lead. Austin Peay would ultimately build an 11-5 advantage before Kansas State started to reel the set back to level, which they did at 17-17. KSU built a 19-17 lead only to watch APSU score four of the next five to lead 21-20. But the Wildcats took control with the set’s next three points and held on to win the match in four sets.

Austin Peay then faced off against Maryland in the second half of the day’s twinbill. The Govs tested the Terrapins in each of the first two sets. In the opening frame, Austin Peay rallied from a five-point deficit at 19-14 to get within a point at 20-19, Maryland needing three consecutive points to fend off the rally to claim the set.

The length of the day appeared to take its toll on the Governors in the third. Maryland opened with a 5-1 lead but Austin Peay State University could get no closer than two points the rest of the way. An 8-0 Terrapins run later in the frame extended the lead to 11 points and the Govs could not recover in time.

Moore scored a double-double in the Kansas State contest, finishing with 12 kills and 13 digs – both match bests. Chloe Stitt [3] also had 11 kills against the Wildcats.

Panning led the way against Maryland with 10 kills with Moore chipping in six kills and Stitt another five.

Key Quartet Emerges
While Brooke Moore’s [1] offensive abilities were well know, less well known was who would jump in to provide offense for the Govs. Some answers emerged in Raleigh as Chloe Stitt [3] and Jenna Panning [2] each joined Moore with an outing of 10 or more kills during the weekend.

Newcomer Tegan Seyring [5] also put her name into the hat as an offensive threat, posting six kills against both North Carolina State and Kansas State.

“Today’s performance was way better, we were much improved from yesterday. We found some rhythm offensively and that showed against Kansas State and Maryland. We still have lots to work on but I’m pleased with our improvement from Day 1.”

APSU Women’s Volleyball returns home to begin preparation for next weekend’s trip to Evanston, Illinois for the Wildcats Invitational hosted by Northwestern. There the Govs will face the host Wildcats along with Stephen F. Austin and Texas Tech.