Nashville, TN – The Nashville Sounds were leading the San Antonio Missions into the seventh inning, but allowed a three-run home run to lose the lead. The Missions added two more insurance runs in the eighth, defeating the Sounds 9-5 Saturday night at First Tennessee Park.

The first run for the Sounds came in the bottom of the first inning. Andy Ibanez hit a solo home run to left-center field, giving Nashville the early 1-0 lead.

San Antonio responded right away with a three-run second inning. Blake Allemand took the lead with one swing of the bat, hitting a bases loaded double that scored two runners. Corey Ray hit in the third run on a ground out, giving the Missions a 3-1 lead. 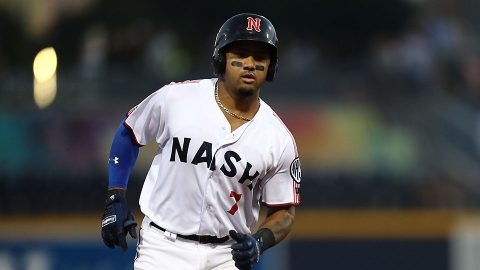 Matt Davidson launched a home run in the bottom of the third inning. The homer gave him his first three RBI of the game and took the lead for the Sounds 4-3. That brought Davidson to 99 RBI on the season.

The Missions responded right away in the top of the fourth inning. Troy Stokes hit a solo home run on a full count, tying the game at four runs apiece.

Nashville retook the lead in the bottom of the fifth inning. With the bases loaded, Davidson hit a sacrifice fly to give him his 100th RBI and Nashville the lead, 5-4.

A three-run home run in the top of the seventh inning gave the Missions the 7-5 lead. With Nate Orf and Lucas Erceg on base, Jacob Nottingham launched the go-ahead home run. They added two more runs in the top of the eighth inning on a two-run homer by Orf. That would be all the runs San Antonio would need as they beat Nashville 9-5.

Matt Davidson continued climbing the single-season franchise leaderboards in home runs and RBI. He is one home run shy of tying the franchise record, trailing Steve Balboni (1980) and Brian Dayett (1982). He is the fourth hitter in Sounds history to reach 100 RBI and trails Drew Denson who hit 103 RBI in 1993 and 1994. Steve Balboni owns the single-season RBI record with 122 in 1980.

Andy Ibanez’ home run was his 19th of the season. That extends his single-season career-high.