Nashville, TN – In the last night game of the season for the Nashville Sounds, Tim Dillard pitched a gem against the San Antonio Missions, throwing 125 pitches and allowed three runs in seven innings while striking out nine. The Sounds won 7-3 in front of 11,348 at First Tennessee Park.

San Antonio scored a run in the top of the first inning during their first two at bats. Corey Ray led the game off with a single and scored on an RBI triple by Blake Allemand. The Sounds responded immediately in the bottom-half of the first inning, scoring two runs on two hits, a hit-by-pitch and an error. The Sounds led 2-1 after the first. 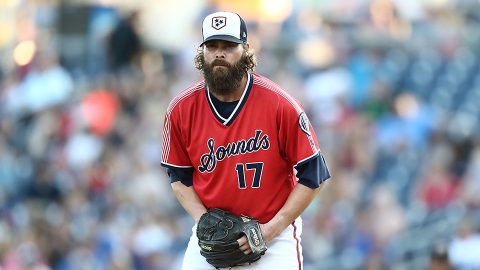 Ray helped San Antonio take the lead in the fourth inning after launching a two-run homer to take the 3-2 lead. Nashville responded again with four runs in the bottom-half.

Jett Bandy led off with a double and was knocked in by Kevin Mendoza on a single to tie the game. After Zack Granite followed him with a single, Christian Lopes launched a three-run homer to give the Sounds a 6-3 lead.

Dillard kept dealing for the Sounds into the seventh inning. He entered the inning with 111 pitches. After getting the first two batters out, he allowed two singles and a hit-by-pitch to load the bases. But Dillard was able to get out of it, getting Jake Hager to ground into a force out. He finished with 125 pitches on the night.

The Sounds grabbed one more insurance run in the bottom of the eighth after an RBI double by Lopes. David Carpenter entered the game in the ninth inning to close out the Missions, giving Nashville the 7-3 victory.

In Tim Dillard’s ninth win of the season, his 125 pitches set a single-game career-high. His previous single game-high was 116 pitches back on August 28th, 2009 at Round Rock. Dillard’s nine strikeouts also tied a season-high, matching the nine punchouts he made on July 13th versus New Orleans.

Christian Lopes finished a triple-shy of the cycle, going 3-for-4 with two runs, a double, a home run and matched a season-high four RBI.

Tonight was the final night game for the Nashville Sounds. They finish the season with a 57-57 night game record. They are 8-15 in day games.

Tomorrow marks the final game of the 2019 season for the Nashville Sounds. With first pitch at 12:05pm, left-hander Wes Benjamin (7-6, 5.52) will start for Nashville.