Posted By Clarksville Online News Staff On Thursday, September 5, 2019 @ 8:00 am In Sports | No Comments

Nashville, TN – This week’s game marks the 67th all-time meeting between the Tennessee Titans and Cleveland Browns. In the previous 66 outings, the Browns own a 35-31 advantage, including separate nine- and six-game winning streaks by the Browns. 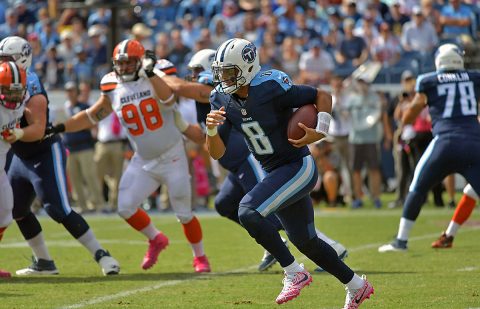 After the reincarnation of the Browns in 1999, the Titans won the next five meetings. Since then, however, the Browns have the advantage, taking five out of nine games.

The last time the two clubs squared off was Week 7 of the 2017 season. Safety Kevin Byard recorded three interceptions, and Ryan Succop’s fourth field goal of the game in overtime provided a 12-9 victory.

2011 Week 4 • Oct. 2, 2011 • TITANS 31 at Browns 13
Game played with winds measured between 20 and 40 miles per hour with light rain in the second half. Titans score 21 points in the first half on three touchdown passes by Matt Hasselbeck, including an 80-yarder to Jared Cook. Jordan Babineaux scores on a 97-yard interception return. Chris Johnson rushes for 101 yards. Browns QB Colt McCoy sets single-game records vs. the Titans with 61 pass attempts and 41 completions.

2014 Week 5 • Oct. 5, 2014 • BROWNS 29 at Titans 28
The Browns erase a 28-3 deficit to complete the largest comeback in NFL history by a road team. Titans quarterback Jake Locker throws for a touchdown and rushes for a score before leaving the game with a hand injury and Charlie Whitehurst plays in relief. Browns quarterback Brian Hoyer goes 21-of-37 for 292 yards and three touchdowns. Browns receiver Travis Benjamin hauls in two touchdown passes, including the game-winner with less than two minutes remaining.

2016 Week 6 • Oct. 16, 2016 • Browns 26 at TITANS 28
Marcus Mariota passes for 284 yards and three touchdowns and adds 64 rushing yards. Kendall Wright catches eight passes for 133 yards, including a 48-yard touchdown. The Browns score 13 points in the final 2:07, but a second onside kick goes out of bounds to seal the Titans’ victory. The Titans sack rookie quarterback Cody Kessler six times, but Kessler has 336 passing yards with two touchdowns.

2017 Week 7 • Oct. 22, 2017 • TITANS 12 at Browns 9
Ryan Succop’s fourth field goal of the day, a 47-yarder with less than two minutes remaining in overtime, provides the victory in a game in which neither team reaches the end zone. Titans safety Kevin Byard becomes the first NFL player since 2011 (Eagles safety Kurt Coleman) to record three interceptions in a game, victimizing DeShone Kizer twice and Cody Kessler once. The Browns defense stops the Titans from scoring in the third quarter on a first-and-goal from the one-yard line. In overtime, the Titans defense forces two three-andouts leading to the game-winning kick.