Clarksville, TN – Austin Peay State University (APSU) head men’s basketball coach Matt Figger [1] is welcoming a former protégé in to round out the 2019-20 roster in Evan Hinson, a transfer from South Carolina. 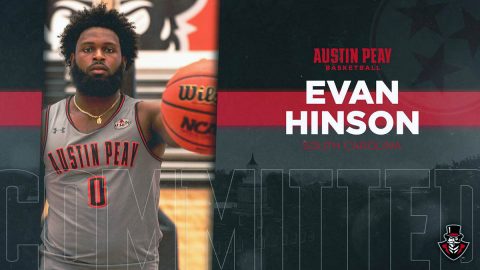 A three-year man at South Carolina on the hardwood, Hinson was the rarest of college athletes in the modern era—a two-sport player, he also saw plenty of snaps on the gridiron for the Gamecocks, playing 23 total games over 2017 and 2018.

But Figger’s familiarity stems from his stint with the Gamecock basketball team in 2016, when South Carolina—with Figger on staff—advanced to the Final Four. Hinson played eight games during that stretch after joining the team in January, then was a vital role player for the next two seasons under Frank Martin—he made 17 starts in 2017-18, and appeared in 46 games for South Carolina over the last three seasons.

At 6-4, 240 pounds, Hinson has the size to battle down low and provide a physical presence as younger Govs get acclimated to the college game. He’ll also be a presence to keep attention off Terry Taylor [2], Austin Peay State University’s two-time All-Ohio Valley Conference choice.

“I give him so much credit for being able to take off the pads and helmet and walk straight into starting in the SEC. I’m excited to see what he can be when he concentrates fully on basketball. He knows our system and style, so the transition should be very smooth for him,” stated Figger.