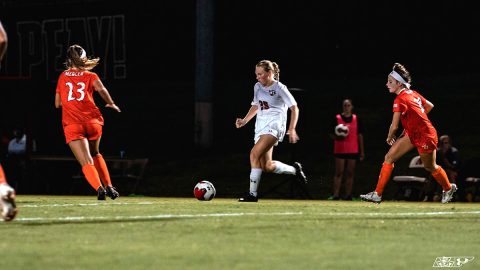 Northern Colorado found the back of the net in the first, scoring what proved to be the game winner in the 21st minute.

The Bears added two more goals in the 26th and 72nd minute, and the Governors were unable to overcome the deficit in their final game in Colorado.

Mary Parker Powell [1] played the first 33 minutes in goal for the Governors, tallying four saves, to bring her season total to 20. In the 34th minute, Mary Parker Powell [1] gave way to Peyton Powell [2] who made four saves of her own in her 41 minutes in net. In the 74th minute, freshman goalkeeper Chloe Dion made her Austin Peay State University debut, she faced no shots in the final 15 minutes of the game.

Senior captain Renee Semaan [5] continues to be a steady presence on the defensive end for the Governors. Semaan has played all 470 minutes this season, and is the only Gov who has yet to leave the field. Semaan even added her fourth shot attempt of the season today, missing high in the 41st minute.

The Govs will be back in action next Sunday when they celebrate Senior Day with a noon match against Evansville. The Govs will honor four seniors, Mary Parker Powell [1], Renee Semaan [5], Meghan Dees [6], and Melody Fisher [7], at Morgan Brothers Soccer Field next week before Ohio Valley Conference play starts the next week.

Opening remarks
“We came out strong in the first ten minutes, and then started to look slow and sloppy. We gave the ball away too much, didn’t transition defensively, and allowed them to be dangerous on the counter attack. I think the altitude played a factor in tired legs today.”

On today’s match
“We had some miscommunication defensively that cost us the second goal, then we missed two opportunities in the second half where we should have scored. It’s tough to swallow; we simply did not play well today. We’ve scored one goal in five games, so we need to focus on finishing the chances we get, because we do get them. We need to stay positive and look towards the next one.”

On the trip to Colorado
“This trip has been great for the team. We’ve had some great experiences and played a couple solid teams that we don’t see each year, so it’s been good in that respect. But we still need to find a level of consistency in our play, as well as a way to put those goals away. That’s what the focus will be this week!”

Up Next For APSU Soccer

The following week, the APSU Govs kick off OVC play with a 7:00pm September 19th match against SIU Edwardsville. Later that weekend the Governors will play a 6:00pm September 21st match at Cincinnati. For all the news and updates regarding Austin Peay soccer, follow along on Twitter (@AustinPeaySOCR).