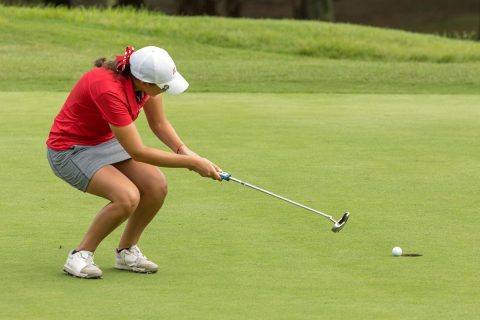 In addition to the Govs and host Missouri State, 10 teams will comprise the field—UTEP, Creighton, Arkansas State, Wichita State, McNeese State, Oklahoma City, Oral Roberts, Drury, South Dakota and UMKC. The two-day, 54-hole event begins with an 8:30am shotgun start and 36 holes on Monday, followed by another 8:30am shotgun start and the final 18 holes, Tuesday.

All five faces heading to Springfield are familiar to longtime Austin Peay women’s golf observers, and the lineup will be led by 2019 Ohio Valley Conference All-Newcomer and All-OVC honors—the fourth player in program history to earn both, including Cathey, her new head coach.

Junior Riley Cooper [2] and sophomore Shelby Darnell [3], who both spent time in the lineup last season, open 2019-20 in Nos. two and three spots. Rounding out the lineup will be junior Andrea Presilla [4], making her first career appearance in the lineup, and senior Meghann Stamps [5] as she begins her final season as a Gov.

There will be no live scoring for the event; however, a complete recap and full results will be available at the end of each day via LetsGoPeay.com.