Clarksville, TN – The Clarksville Transit System (CTS) continues to drive forward in its efforts to update or replace bus shelters throughout Clarksville.

“We understand the need for updating or replacing current shelters and continue to make that a priority for the community,” said Paul Nelson, CTS Interim Director. 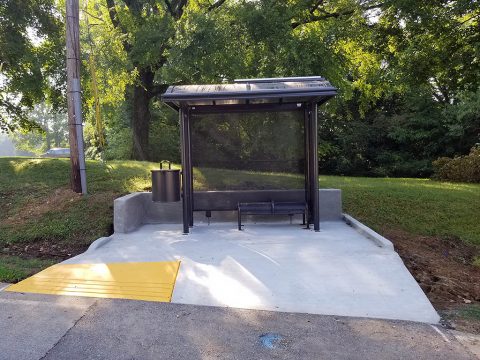 The Clarksville Transit System continues to add new bus shelters throughout Clarksville. The shelters include a bench, solar powered LED lights, a trash receptacle and space for wheelchair access.

CTS is adding shelters at these locations:

Additionally, three shelters along Madison Street will be updated with solar-powered lights.

CTS also recently released a collective map for public use, highlighting bus stops and shelters across the City. To access the map, go to http://bit.ly/2kAKuPu. [1]

“We began this [map] when we started replacing our old bus stop signs,” Nelson said. “It is a work in progress as we add new signs and shelters. We hope that when complete, it can be added to our future customer app, as each entry contains a location photo and list of amenities. You can also sort by shelter and bench locations.” 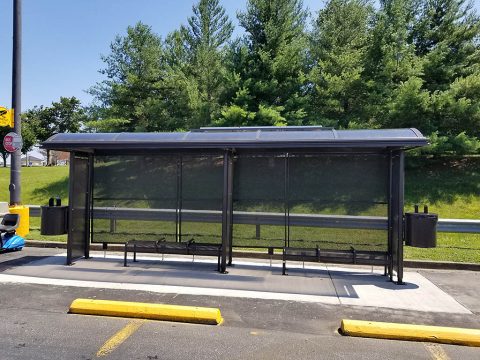 The Clarksville Transit System replaced a shelter at Walmart on Fort Campbell Boulevard in July 2019. The new shelter is 5-feet larger than the old shelter, has two ADA accessible spots and is equipped with two solar security lights.

The process of picking a site and building a bus shelter requires several steps.

“Shelter location selection starts with a stop survey to see if there are enough passengers boarding at that location to justify a shelter, since resources are limited,” Nelson said. “All requests are investigated first by determining if the terrain and area will allow for a shelter. If so, then we will conduct a stop survey of the location. If the survey data shows a shelter may be justified, we then move to the right of way and permission phase.”

This phase requires contacting the Clarksville Street Department or Tennessee Department of Transportation if it’s a state road, to determine if there is enough right of way for the shelter and to meet any requirements those departments might impose.

“If the shelter and concrete pad will not fit entirely within the area, we must gain property owner permission,” Nelson said. “Unfortunately, this is where some shelter projects end as we are unable to get permission from the property owner.”

Once the appropriate permissions are gained, CTS moves to the design phase, where officials determine the exact size and placement of the concrete pad, as well as if they need a retaining wall, curb cut, or an accessible path, which is required by the Americans with Disabilities Act. Once designed, the pad is poured and a few days later, depending on weather, CTS can erect the new shelter.

Nelson said the new shelters are typically 9-feet wide and include a 4-foot passenger bench, accessible waiting area, trash can, solar light and possibly a map and advertising case.

Deciding if a bus stop shelter will be replaced or repaired is based on the condition of the existing shelter. Nelson said an important factor is whether or not CTS can bring the shelter and concrete pad up to ADA standards.

Earlier this year, CTS replaced the nearly 20-year-old shelter at Walmart on Fort Campbell Boulevard after deeming it could not be repaired. The new shelter, based on CTS’s updated design, is 5-feet larger than the old shelter (21 feet versus 16 feet) , has two ADA accessible spots and is equipped with two solar security lights.