Clarksville, TN – As Americans, we probably know more about World War II than any other war in our history. We have heard about D-Day from movies and stories told by our soldiers who landed on the beaches and parachuted into pastures and towns to fight for France. They fought and died to liberate men, women, and children from enemy forces. 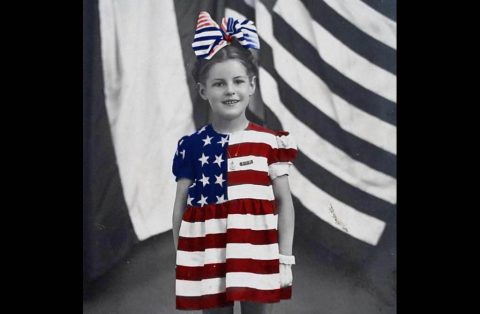 The Girl Who Wore Freedom screening to be Sunday, September 22nd, at the Clarksville-Montgomery County Library.

But an important piece of D-Day history has been missing – stories of the Normandy citizens who were occupied and liberated on that day. For the people of Normandy, D-Day is more than a date in a history book or archival footage on a movie screen.

D-Day is liberation. D-Day is freedom. For the last 75 years, their love and appreciation for their liberators continues to be passed on from generation to generation.

A new feature-length documentary, The Girl Who Wore Freedom, captures stunning first-hand accounts of the French citizens living under Nazi occupation. It captures their suffering during the Allied Invasion and subsequent Battle of Normandy. It documents their joy at liberation and their undying gratitude to America.

Their first-hand accounts will echo through history:

“Americans, they are our liberators. We have to thank them forever.”

“In all the cemeteries, there were so many deaths to save France and all the countries occupied by Germany. Where would we be, the French, if you, the Americans hadn’t come?”

“That some boys, in some cases, kids went ashore to our beaches. When you realize that you are free, that you can use your language and continue to maintain your traditions, then you realize what they have done and the sacrifices that many of them have made.”

The Girl Who Wore Freedom is an unconventional love story between the people of Normandy, France and the American GI’s who freed them from German occupation. It is told by those that lived it. Memories of hardship, death, heroism, and love.

Experience the profound gratitude for America’s sacrifice when you view the movie trailer at www.normandystories.com [2]

Normandy Project, LLC is hosting a focus group screening at the Clarksville Montgomery County Public Library- 350 Pageant Lane # 501, Clarksville, TN. The screening will begin at 2:00pm on Sunday, September 22nd, 2019. Doors open at 1:30pm. Admission is free but reservations are requested. The Director and crew will also have a booth at Beachhaven Winery as part of the Welcome Home Veterans Celebration.

Questions can be answered by emailing [3]

This film is a must for anyone who supports our veterans, is passionate about history and enjoys unique documentary films.

Christian Taylor, creator, producer & director, and other members of the cast and crew will be on hand for a question and answer session following the screening.

About The Girl Who Wore Freedom

The Girl Who Wore Freedom is a co-production by Taylor Productions LTD and Reverse Negative Studios Inc. under Normandy Project LLC. It is a documentary film telling the unconventional love story between the people of Normandy, France, and the American veterans who liberated them. This film is an independently produced and financed project. The film was screened in France for the 75th anniversary of D-Day.

The producers are seeking financial support to complete production. If you would like to donate or share your stories of WWII, please visit our website at www.normandystories.com [2]