Nashville, TN – This week’s game will mark the 50th all-time contest between the Tennessee Titans and the Indianapolis Colts. The Colts lead the series 33-16.

The last time the Titans and Colts met at Nissan Stadium was the 2018 season finale on Sunday night, December 30th, 2018. It was a contest to decide who would clinch a playoff berth as the AFC’s sixth seed. The Titans were forced to play the game without injured starting quarterback Marcus Mariota. The Colts were opportunistic and pulled away in the fourth quarter for a 33-17 victory. 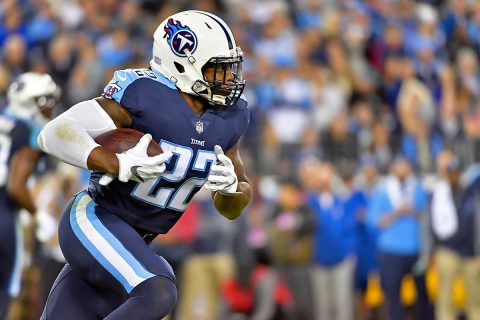 Tennessee Titans running back Derrick Henry (22) rushes against the Indianapolis Colts during the first half at Nissan Stadium on October 16th, 2017. (Jim Brown-USA TODAY Sports)

In the first meeting of 2018, played on November 18th at Lucas Oil Stadium, Andrew Luck totaled 297 yards and three touchdown passes to lead the Colts to a 38-10 victory. Mariota left the game in the second quarter due to an elbow injury.

2017 Week 6 • Oct. 16, 2017 • Colts 22 at TITANS 36
In a Monday night game, Marcus Mariota passes for 306 yards and a touchdown, and Ryan Succop connects on five field goals. Mariota’s 53-yard touchdown pass to receiver Taywan Taylor breaks a 22-22 tie in the fourth quarter, and Derrick Henry’s 72-yard touchdown run seals the victory. Henry totals 131 yards on 19 carries, and DeMarco Murray adds 40 rushing yards and
a touchdown. The Titans defense limits the Colts and quarterback Jacoby Brissett to 22 percent on third down in the game and 111 total yards in the second half. Colts linebacker John Simon scores on a 26-yard interception return.

2017 Week 12 • Nov. 26, 2017 • TITANS 20 at Colts 16
DeMarco Murray scores the go-ahead touchdown on a one-yard run with 5:59 remaining in the fourth quarter. The Titans erase a 10-point deficit in the second half. The Titans defense sacks Jacoby Brissett eight times, tied for the third-highest single-game sack total in Titans/Oilers history. Led by Derrick Henry (79 rushing yards in the game), the Titans collect 89 of their 92 total rushing yards in the fourth quarter. Kevin Byard recovers a fumble on the Indianapolis four-yard line to set up a touchdown.

2018 Week 11 • Nov. 18, 2018 • Titans 10 at COLTS 38
Andrew Luck completes 23 of 29 passes for 297 yards with three touchdowns, no interceptions and a 143.8 passer rating. The Colts outscore the Titans 24-3 in the first half. Blaine Gabbert finishes the game at quarterback for the Titans after Marcus Mariota leaves in the second quarter with an elbow injury. The Colts defense records two interceptions and five sacks. Colts receiver T.Y. Hilton totals 155 yards and two scores.

2018 Week 17 • Dec. 30, 2018 • COLTS 33 at Titans 17
In a Sunday night game to determine the sixth and final spot in the AFC playoffs, the Colts prevailed behind three touchdown passes by Andrew Luck and 119 rushing yards and a touchdown by Marlon Mack. Blaine Gabbert started at quarterback for the Titans in place of an injured Marcus Mariota (neck/foot) and passed for 165 yards and one touchdown with two interceptions. The Titans were driving in the fourth quarter trailing 24-17 before cornerback Kenny Moore II swung momentum back to the Colts with an interception. Titans linebacker Jayon Brown contributed an interception for a touchdown and a forced fumble and recovery.