Tampa, FL – AAA says gas prices continue to trend – slowly, but surely – cheaper with half of all states seeing pump prices drop two-cents on the week. This caused the national average to push cheaper by a penny down to $2.56. Today’s average is 11-cents less than a month ago and 28-cents cheaper than a year ago.

In its latest weekly report, the Energy Information Administration (EIA) notes that U.S. gasoline demand saw a steady decline from 9.9 million b/d to 9.4 million b/d, a reading typical for the start of fall. 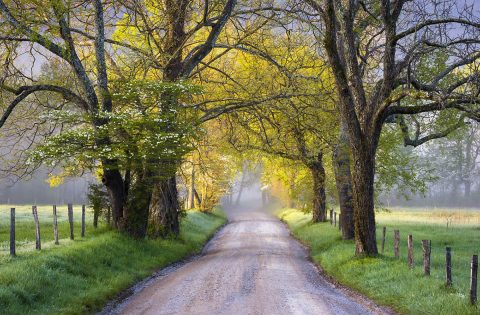 Gas prices to get cheaper this Autumn. (AAA)

In addition to the drop in demand, EIA data also shows that domestic gasoline stocks fell by 2 million bbl, which is mostly attributed to exports.

“Gasoline demand in early September generally declines alongside stock levels as refineries prepare for the switchover to winter-blend gasoline and undergo maintenance,” said Jeanette Casselano, AAA spokesperson. “These typical trends mean savings for motorists, leading the way for potentially some of the cheapest gas prices at the end of the year.”

While state averages range from as expensive as $3.65 in Hawaii to as cheap as $2.16 in Mississippi, nearly all state averages are 20-55 cents cheaper than this time last year. 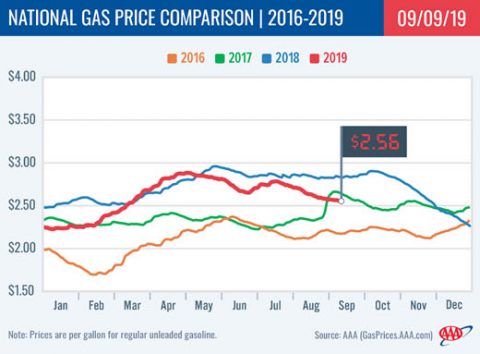 Gas prices in Florida are inching down toward pre-Hurricane Dorian pump prices. Ahead of the storm, Florida’s average spiked eight cents from $2.36 to $2.44. Today’s state average is $2.42. Georgia and South Carolina saw minimal impact from the storm.

On the week, all states have cheaper or stable gas prices – by as much as three cents. Across the region, state averages range between $2.16 – $2.42.

Gas prices in the coming week may see volatility due to fluctuation with gasoline stocks. While regional refinery utilization holds strong at 95%, gasoline stocks dropped by 3.2 million bbl in the EIA’s latest report. That sinks total stock levels to 77.1 million, which is the lowest level at the end of August for the region since 2015.

The draw can be attributed to an increase in exports, which is a trend typically seen in the fall. The fluctuation in stocks could lead to some slight increases at the pump this week, but likely only by a few cents.

Compared to a year ago, pump prices in the Mid-Atlantic and Northeast states are 22 to 55 cents cheaper, with Delaware (-55 cents) having the largest change in the country. Maryland (-42 cents) and Washington, D.C. (-37 cents) also land on the top 10 list for largest yearly decreases.

The yearly gas price gap is likely only to widen more. with all states in the region seeing gas prices decrease or remain stable on the week. 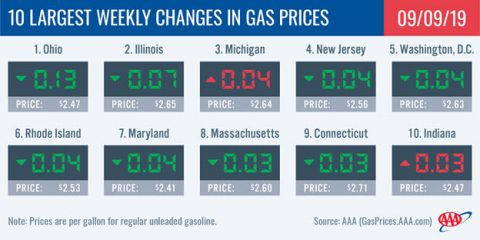 Prices should remain mostly stable or cheaper for the coming week as the latest EIA data reports increases in regional gasoline stocks.

Additionally, regional refinery utilization bumped up for the week ending August 30th. Stocks have been consistently building for the past five weeks, up from 59.1 million bbl to 65 million bbl.

However at 65 million bbl, supplies still lag behind year-ago levels, but are ahead of the five-year average.

While gas prices are 13 cents cheaper on the week in Ohio ($2.47), motorists in Michigan ($2.64) are paying nearly a nickel more compared to last Monday.

Also seeing increases at the pump at the start of the work week: Indiana (+3 cents), Kansas (+1 cent) and Missouri (+1 cent). Volatility is no stranger to the Great Lakes and Central States, where gas prices can fluctuate either way despite strong gasoline stock levels and healthy demand.

For the past three weeks, gasoline stocks have hovered at the 51 million bbl mark while regional refinery utilization stabilized mostly at 100%, according to the EIA.

These two factors should ultimately keep gas prices cheaper for the region for the coming weeks with the exception of typical volatility mostly in Ohio, Michigan and Illinois.

Motorists in Colorado ($2.57) are paying three cents more to fill-up on the week – the only state in the region to see an increase at the pump. Utah and Idaho prices are both three cents cheaper. Pump prices were stable on the week in Wyoming ($2.68) and Montana ($2.72).

All states in the region rank among the top 15 most expensive gas prices in the country with the exception of Colorado, which ranks 20th. That being said, pump prices across the region are on average 33 cents less than this time last year.

Gasoline stocks saw a small build of 54,000 bbl to bump regional stock levels to 7.5 million. The EIA data also reports held regional refinery utilization is strong at 102%. In fact, since mid-July regional refinery utilization has been at or above the 100% mark for six weeks. This ultimately has contributed to higher stock levels and lower gas prices for motorist in the Rockies states.

Motorists in the West Coast region are paying the highest pump prices in the nation, with all states in the region landing on the top 10 most expensive list today. Hawaii ($3.65) and California ($3.63) are the most expensive markets in the country. Washington ($3.19), Nevada ($3.11), Oregon ($3.04), Alaska ($2.95) and Arizona ($2.88) follow. Most state averages in the region have decreased on the week. However, California and Arizona saw increases at a penny each.

The EIA’s recent report for the week ending on Aug. 30 showed that West Coast gasoline stocks decreased by 600,000 bbl. The total level is now 28.4 million bbl, which is in line with stock levels at the end of August 2018. Prices in the region will likely decline this week.

At the close of Friday’s formal trading session on the NYMEX, WTI increased by 22 cents to settle at $56.52. Domestic crude prices rose last week after the EIA reported that total domestic crude inventories fell by 4.8 million bbl. At 423 million bbl, stocks are approximately 21.5 million bbl higher than were they were at the end of August 2018.

Higher inventory levels have helped to keep oil cheaper this year over last, but if EIA’s report this week shows that stocks continue to shrink, prices could end the week higher again. Alternatively, if ongoing trade tensions between the U.S. and China escalate, crude prices could fall.