The Govs picked up right where they left off last season, as four of six individuals won their first round match. 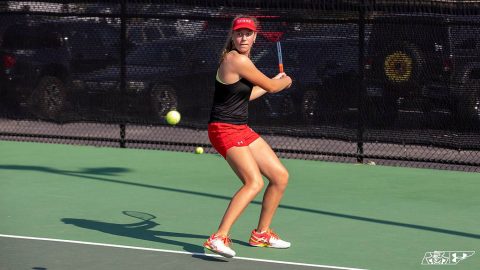 Keeping things going in the quarterfinals; three Governors punched their tickets to the semifinals Saturday morning. It was a similar scene in the afternoon doubles matches, as the Govs have two of their three doubles-duos in the semifinals tomorrow afternoon.

After day one of the APSU Fall Invitational, one Gov remains in the semifinals of each singles flight. In Flight One, junior Fabienne Schmidt [1] finds herself in a similar position to last season, when she advanced to the Flight One finals, and dropped the final match to her teammate. She will look to be the second straight Governor to take home the Flight One title.

In Flight Two, sophomore-transfer Martini Paladini-Jennings started off her career as a Governor by knocking off two Ohio Valley Conference opponents to advance to the semifinals. In Flight Three, senior Ana Albertson [2] finds herself back in the semifinals of this event. She posted a second place finish in her 2016 freshman campaign, and looks to do one better in her final year.

In the afternoon doubles matches, the Governors took care of business in Flight one. The duos of Paladini-Jennings/Topalovic and Schmidt/Morris both won two matches to advance to the semifinals. Last season, the Govs swept the doubles Flight One, sending both their teams to the championship. They will look to break out the brooms once again tomorrow.

Opening remarks
“Obviously, under these difficult conditions when it’s this hot, we were looking for our players to be tough and see what they are made of out there. I was very pleased with Fabienne [Schmidt], she played some really good tennis out there, and I was encouraged with what I’m seeing from her. Martina [Paladini-Jennings] also had a good day out here, with a couple wins, and beating a player from Murray [State], which is good.”

On the freshman Governor
“Our freshman, Sarah [Heckel], I think she was struggling a little bit with the heat, being from Germany. Also with the change from clay courts to hard courts, so it’s a building process. Tomorrow we are going to look at where we are and see if we can make some adjustments, and keep improving.”

On the Gov’s lone senior


Ana [Albertson], did a good job out there. She’s very consistent in the back of the court, and played her game. She played  both her singles matches later in the day, in the heat, so she stayed tough and played well. I was also impressed with her in doubles today, so I’m encouraged with her and what she’s doing with the rest of the girls.

The Govs will get back in action tomorrow morning at 8:30 for the final day of the APSU Fall Invitational. For news, scores, and updates on all of tomorrow’s matches, follow along on Twitter (@AustinPeayWTN).