Clarksville, TN – Austin Peay State University (APSU) women’s tennis brought home a pair of singles titles and a doubles title at the final day of the APSU Fall Invitational as the Governors capped off a successful opening weekend. 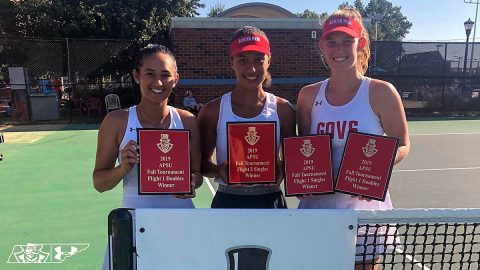 Junior Fabienne Schmidt [1] and sophomore Martina Paladini-Jennings [2] both took care of business, winning their respective flight and taking home the hardware at the APSU Fall Invitational.

The Govs also took the crown on the doubles side, with the duo of Schmidt and Danielle Morris [3] knocking off a team from Murray State.

After dropping the Flight 1 Singles title to her own teammate last season, Fabienne Schmidt [1] took care of business this year to keep the title in Clarksville. In Flight 2 Singles, the sophomore-transfer Martina Paladini-Jennings [2] ran the table to claim the title in her Austin Peay State University debut.

In Flight 1 Doubles, the Govs had two teams in the semifinals to start the day. The pair of Govs from England, Paladini-Jennings and  Aleks Topalovic [4], dropped their semifinal match to a team from Murray State. However, the two were avenged when the Gov’s duo of Schmidt and Danielle Morris [3] knocked off the same team from Murray State in the championship match.

On the Govs who won
“I’m very pleased with Fabienne Schmidt [1] and Martina [Paladini-Jennings] winning their divisions. Martina defeated three Murray [State] players, so that makes my day! It was also very pleasing that Fabienne and Danielle [Morris] won their doubles flight!”

On the APSU Fall Invitational
“Overall it’s a very good place to start out year, but there is no question we have areas to improve. I’m proud of our women and I believe what we conveyed to conference teams is that we are going to be tough again.”

Next Up For APSU Women’s  Tennis

The Govs will be back in action September 27th when they start play at the UCA Fall Classic in Conway, AR. For all the news regarding Austin Peay State University women’s tennis, follow along on Twitter (@AustinPeayWTN).