Fort Campbell, KY – On September 27th, 2019, wounded, ill and injured Soldiers will participate in a 101-mile bike ride, “Where Heroes Rendezvous,” on Fort Campbell and in the surrounding communities.

More than 70 riders, including wounded, ill or injured Soldiers assigned to the Fort Campbell, Fort Stewart, Georgia, and Fort Benning, Georgia Warrior Transition Battalions, as well as cadre, veterans and volunteers will ride, sharing their support of WTB Soldiers along the route. The community can help cheer for riders as they ride past along the route. 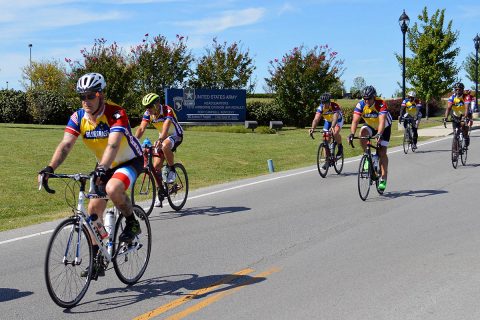 Participants ride the final stretch past the 101st Airborne Division (Air Assault) Headquarters on the way to the finish line during a previous endurance ride in 2015. (U.S. Army photo by David Gillespie)

This annual event once known as the Bluegrass Rendezvous, which was a 2-day event when Fort Campbell and Fort Knox Warrior Transition Soldiers combined units and rode from Fort Knox to Fort Campbell.

Since Fort Knox’s Warrior Transition Soldiers are now receiving care by other units, Fort Campbell continues the tradition of the ride; however, the ride now centers on and around Fort Campbell. 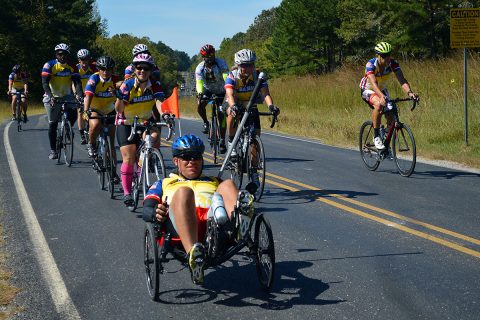 With a total of 20 WTB Soldiers from three installations scheduled to participate, the Soldiers have been training and preparing for this long-distance ride since April.

In addition, more than 50 cadre, veterans and volunteers will be participating alongside the Soldiers throughout the ride. Riders will travel through the countryside of Clarksville and several counties in Kentucky. The team plans to break every 25 miles for water and refreshment breaks, as well as equipment and medical support if needed. Local area police authorities have been notified of the route and timeline within each of the communities.

Battalion commander. “We focus our events around opportunities where Soldiers can set difficult but achievable goals while building a support network around them.”

Soldiers participating who may need adaptive biking equipment can also participate in the ride.

“Adjustments are made for riders who are not able to make the ride on the standard bikes you typically see in a biking event,” said Lindsey Davidson, Fort Campbell WTB Physical Therapist and Adaptive Reconditioning Program Manager.

“We monitor each person’s capability and make adjustments for the individual. This allows Soldiers to realize just because a task may not be completed as they did once before, doesn’t mean you cannot still accomplish the task. We just find a different way for it to be accomplished to allow them to succeed,” Davidson stated.

At least nine Soldiers will be using recumbent bikes during this year’s ride. The recumbent bikes enable injured Soldiers to participate, helping to reduce the risk of pain and can build strength.

The evening of September 26th, riders will enjoy a spaghetti dinner at the Soldier and Family Assistance Center and will depart at 7:00am, September 27th from building 2114 Indiana Avenue on post.

Along the route, “Where Heroes Rendezvous” riders will pass by Indian Hills Elementary School off Golf Club Lane in Hopkinsville and then follow Fort Campbell Boulevard until reaching Gate 7 to return back to the Fort Campbell WTB Headquarters complex. Riders are expected to return to the WTB headquarters around 4:00pm, Friday, September 27th.