Clarksville, Tn  – The Governors scored first in both halves, but SIU Edwardsville had an answer each time, as Austin Peay State University soccer picked up a point and earned a tie in its third straight Ohio Valley Conference opener. 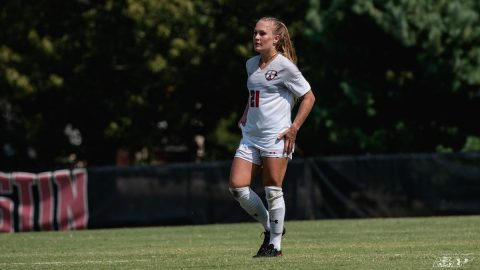 Ashley Whittaker scored in the 18th minute to give the Govs an early advantage, but SIUE answered as the clock was winding down on the first half. Abigail Gemza scored in the 61st minute to get the lead back for the Govs, but once again SIUE answered late in the half. At the end of regulations, the Governors and Cougars were deadlocked at 2, and it remained that way through two overtime periods.

Opening Remarks… “The ladies played fantastic tonight; their work rate was good, we connected well, we scored first, and we limited corners and throw-ins in the back third. We again met some of the small, game-specific goals we set.”

On the OVC opener… “It’s a great to start conference play with a point on the table. SIUE is a quality side, I think they are a top four team in the OVC. To hang with them, be as good as they are, and almost beat them, was a really positive start to conference play for us.”

On tonight’s match… “I do believe we had the opportunity to win the game. We’ve got to be better when leading in those final minutes of a half. We became a little complacent and with that the focus dropped and we conceded. It happened both halves tonight so it’s defiantly something well look back over film at and try to fix.”

The Governors struck first in tonight’s OVC opener. In the 18th minute Ashley Whittaker took a Claire Larose pass on a breakaway and beat the Cougar’s keeper for her season’s first goal. The Whittaker goal and Larose assist gives each of them three points on the season, which is tied for the Austin Peay team lead. With the clock winding down in the first half, SIUE was able to find the back of the net off a corner kick in the 45th minute.

The second half scoring followed the same script as the first. In the 61st minute, Govs freshman Abigail Gemza netted the first goal of her collegiate career. With the lead back in hand, the Governors held strong, until SIUE was able to tie it up in the final minutes of the half. SIUE’s 88th minute goal sent the game to overtime, Austin Peay’s second trip to overtime in seven games.

The first overtime period came and went with nobody finding the back of the net, and the Govs firing the only three shots. The second overtime had a little more excitement with the Govs getting two shot on goal. SIUE got one shot on goal in the second overtime, but Governor keeper Mary Parker Powell made an outstanding diving save to keep the game all tied up.

Neither team was able to find the back of the net in overtime, and the game ended in a 2-2 draw. This is the third straight season that the Governors have played their OVC opening match to a draw.

Austin Peay will be back in action on Saturday when they travel to the Queen City for a 6 p.m. Saturday match with Cincinnati. The Governors will square up with the Bearcats at Gettler Stadium, and the game will be streamed live on Bearcats TV. Follow along on Twitter (@AustinPeaySOCR) for news, scores, and updates.