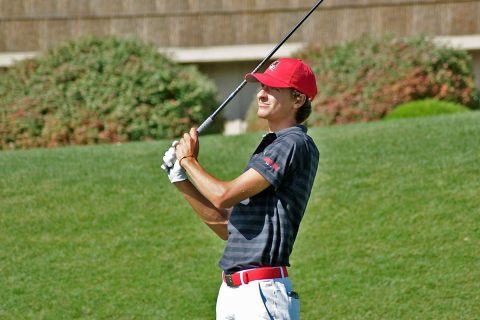 The annual fall event, established in 2012 to honor former SIUE golfer Derek Dolenc, who passed away in 1991, will take place at Gateway National Golf Links in Madison, Illinois. The par-71 course is measured at 7,092 yards.

Austin Peay has not visited the event since 2015, meaning no current member of the lineup had seen the competition track at Gateway National prior to Sunday’s practice round. Fortunately, head coach Robbie Wilson [1] will send out a veteran-laden lineup featuring a junior in Chase Korte [2] and a trio of seniors in Michael Busse [3], Austin Lancaster [4] and Alex Vegh [5].

Tate Dickerson, the lone underclassman in the lineup, has been no slouch early on—in his first collegiate tournament two weeks ago in Hattiesburg, Mississippi, he fired a final-round 67 to place 14th at the Sam Hall Intercollegiate.

The Govs will go off Holes No. 1-3 at 8:15am, Monday, paired with SIUE and Omaha for the opening 36 holes. Tuesday’s final round also is set to begin at 8:15am, with live scoring for all three rounds provided courtesy BirdieFire.com.