Madison, IL – A second-round 293 and late-round eagle barrage began to salve the wound of a difficult opening round for Austin Peay State University (APSU) men’s golf team at the Derek Dolenc Invitational, but the Govs will need to go low again on Tuesday if they want to leap into the top-10 at Gateway National Golf Links. 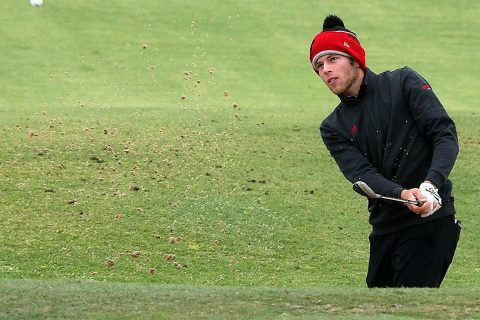 Sharing 13th place, Austin Peay State University is six strokes from the top-10 and 12 from the top-five, and could take a page from the Missouri State book of rallying after a tough first round—the Bears shaved 20 strokes off from round one to round two and moved from a tie for 15th to a tie for fifth, alongside Drake and Loyola Chicago.

There are certainly positives to point to after 36 holes; the Govs led the way with a trio of eagles on opening day, and their par-3 stroke average (3.16/hole as a team) is firmly in the upper echelon among teams in the field. But Austin Peay’s par-4 (4.33/hole) and par-5 (5.15/hole) scoring lags near the bottom, ahead of only Eastern Illinois on the par-5 efforts.

Another positive note: Michael Busse [1]. The Michigan man’s two-under 140 (69-71) has him enjoying a share of fifth with 18 holes to go. He closed his second round with an eagle on the par-5 at No. 18, which is where all three Governor big birds came in the afternoon round.

Senior Austin Lancaster [2] was most consistent Gov on the day, with a 73-74 highlighted by another of the second-round eagles. One shot behind Lancaster was freshman Tate Dickerson, who shook of a tough opening round and a seven on No. 5 to shoot one-under for the remainder of the second round. Dickerson also tied for the tournament lead on par-3 shooting, averaging 2.60 strokes per hole birdieing the par-3 at No. 4, the second round’s sixth-toughest hole.

Austin Peay finishes off the Derk Dolenc Inviational with an 8:15am shotgun start, Tuesday morning. The Govs are scheduled to be paired with Murray State and Southern Utah, beginning on Holes No. 12-14.