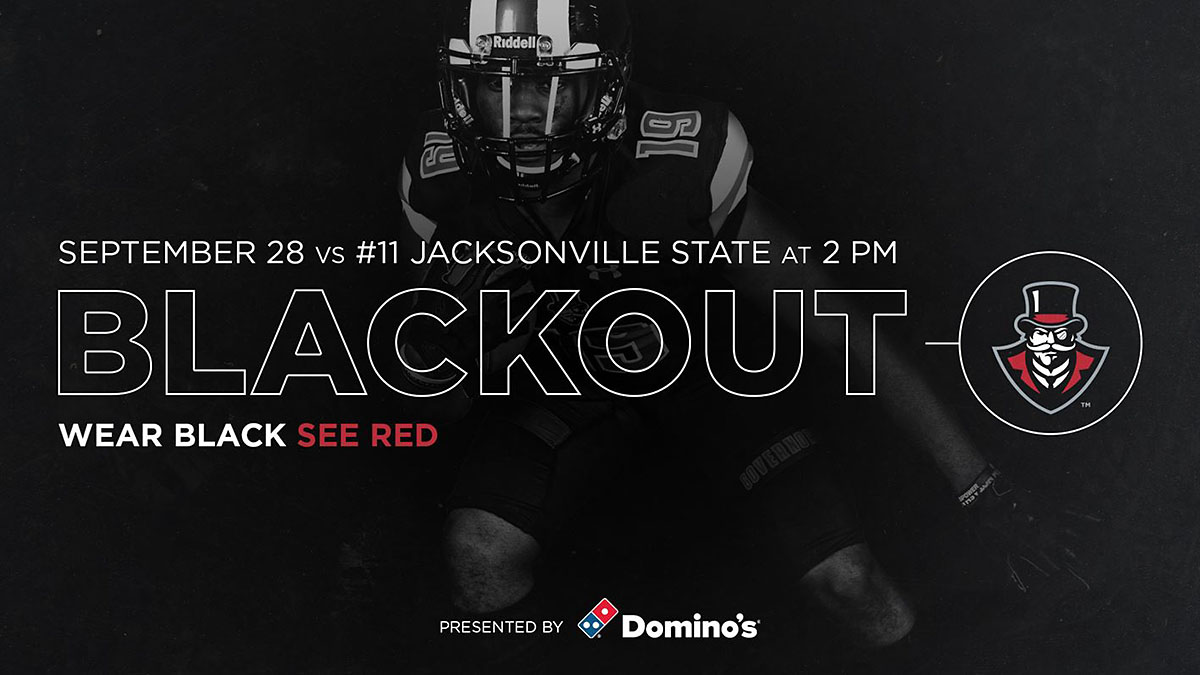 Clarksville, TN – The Austin Peay State University (APSU) football team will welcome 11th-ranked Jacksonville State to Fortera Stadium, Saturday, September 28th, 2019 for a 2:00pm matchup against a perennial Ohio Valley Conference favorite that will reverberate up and down the league standings. 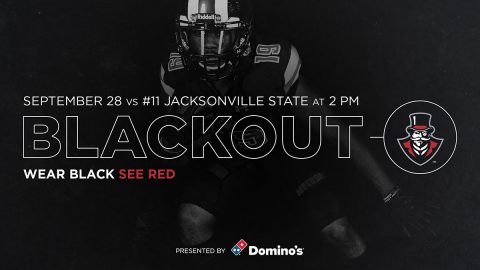 The Govs have not beaten the Gamecocks since returning to the OVC on a full-time basis in 2007, but it’s only recently that the Governors have assembled a talent level comparable to that of Jacksonville State.

Austin Peay State University’s offensive weapons (Kentel Williams, DeAngelo Wilson and Baniko Harley, to name a few) will provide a test for Jacksonville State, while the Governors defense will face down preseason All-Americans Josh Pearson, Zerrick Cooper and the rest of a high-powered Gamecock offense.

APSU encourages all fans to wear black for Saturday’s contest against Jacksonville State. In addition, a limited number of special edition Blackout shirts, sponsored by Domino’s, will be available to fans upon entry to the facility.

The Austin Peay State University athletics department has designated Saturday’s game as an Operation: Sellout event, unlocking a special single-game ticket discount available only online (LetsGoPeay.com/BuyTickets) and using the promo code SELLOUT. Fans who purchase their tickets online before 4:00pm (CT), Friday also will receive one of the special edition Blackout shirts in addition to the special ticket discount.

The week that saw APSU’s Kordell Jackson come away with two pick-sixes and OVC Defensive Player of the Week honors, it was JSU’s Marlon Bridges who earned national acclaim for his pick-six, the third of his JSU career, in the Gamecocks win against then-fourth ranked Eastern Washington. Bridges, a preseason All-American and Buck Buchanan Award Watch List member, also has 3.5 tackles for loss and three forced fumbles as the catalyst for the Gamecock defense.

Last Time Out Against Jacksonville State

The Govs were within two points after three quarters in Jacksonville last season, thanks to a trio of Jeremiah Oatsvall touchdown passes. The Gamecocks 20-point outburst in the fourth quarter unfortunately put the Govs away, despite Oatsvall tacking on another late TD toss. For the sixth straight season, the Gamecocks will square off against the Govs as a top-10 foe.

Jacksonville State, owner of the last five OVC titles, has been ranked in the final national poll every season since 2012.

For the third time since 2009, multiple ranked foes will visit Fortera Stadium, with the 11th-ranked Gamecocks joining Central Arkansas as ranked opponents hosted by the Govs. In two of those seasons, the Govs won at least one of those games, defeating 18th-ranked UT Martin in 2017 and 20th-ranked Eastern Kentucky in 2009.

The Govs are looking for their first home win against Jacksonville State since 1960.

The Govs have traditionally formed a formidable offensive line, and that trend has continued in 2019. Through four games, the Govs have surrendered just two sacks–coming within six plays of one another last week against ETSU.